Despite being the world’s first crypto coin, Bitcoin (BTC) has lagged far behind Ethereum in terms of use cases. The only use case for Bitcoin until now has been as an investment asset. In contrast, the Ethereum blockchain’s token, ETH, has emerged as more than just a digital currency. ETH facilitates use of the Ethereum platform for the development of other cryptos, and for the execution of smart contracts and decentralized applications. While Wrapped Bitcoin (WBTC) enables BTC to be used on Ethereum, a third-party custodian must still convert BTC into WBTC. Threshold Network overcomes this security issue with its fully decentralized BTC-ETH Bridge.

What Is Threshold Network?

Launched in January 2022, Threshold Network is the first-of-its-kind product of a merger between two decentralized protocols — NuCypher (NU) and Keep Network (KEEP) — to provide full security and privacy to its users. Threshold Network takes its structural elements from Keep Network, and privacy elements from NuCypher. The combined network provides a suite of Threshold cryptography services that aim to solve some of the biggest concerns around privacy, as well as granting users full sovereignty over their digital assets on the public blockchain. Its services include proxy re-encryption service (PRE) and the tBTC bridge protocol.

The growth of blockchain-based decentralized apps (DApps) is enabling the growth of a new era of the internet, also popularly referred to as web3. However, the current web3 platforms built on public blockchains present risks to user privacy. Through proxy re-encryption service (PRE), Threshold Network provides a unique solution for user privacy concerns in web3. The proxy re-encryption allows users to control access to sensitive data on public networks without exposing the underlying data to any external party or validator.

Apart from addressing concerns over privacy and usability of users’ data, Threshold cryptography endows digital assets with greater utility in a secure and trustless manner. This is achieved with its decentralized tBTC bridge, which connects Bitcoin to Ethereum, thus bringing more liquidity to the Ethereum ecosystem. There’s no need for an intermediary or third party to convert BTC to the tBTC token, an ERC-20 token that can be used in the Ethereum network.

Threshold cryptography works by distributing sensitive operations across multiple nodes in a network. These nodes operate as independent entities. For any operation to be successful in the network, a minimum number of entities (or threshold) need to cooperate with each other. Threshold cryptography reduces dependence on trusted parties, as no single actor can manipulate the system. If some bad actors do crop up, Threshold Network’s cryptographic primitives will continue to function safely as long as a minimum number of participants follow the rules.

What Is the Threshold Network Token?

It not only facilitates the running of the network, but also offers multiple ways to earn. For instance, the T token can be used to stake a node and reap rewards. Holders of T token can help run Threshold Network by staking and running a decentralized node to verify any network activity.

As a governance token for holders, T is required to vote on important decisions on the network. T token holders can ensure the decentralized and community-driven nature of the network by participating in the Threshold DAO.

tBTC is a Bitcoin-backed token that can be minted on the Ethereum blockchain. The tBTC protocol helps bring Bitcoin to Ethereum in a permissionless and secure way. It’s also the only decentralized option available for using BTC on the Ethereum network.

Currently, the most common way of using BTC on ETH is to keep Bitcoin in the custody of a centralized provider, who then issues a tokenized version of BTC on Ethereum (such as Wrapped Bitcoin, or WBTC). This means that users have to place their trust in a third-party intermediary — which defeats the main principle of Bitcoin and cryptocurrency in general: To be open and decentralized.

With the help of Threshold cryptography and crypto-economic incentives, tBTC replaces the centralized custodian model, enabling permissionless minting of BTC on Ethereum. Each tBTC token is pegged to Bitcoin at a 1:1 ratio. tBTC v1 was launched in May 2020, but the protocol ultimately lacked scalability, due to high collateral requirements. Threshold developers are now planning to introduce tBTC v2 in order to eliminate the scalability constraints of tBTC v1. tBTC v2 will be the first noncustodial solution to bridge BTC to Ethereum at scale.

Scaling with tBTC v2 would bring about the seamless transfer of millions of BTC across Ethereum (and other networks), making Threshold Network a viable competitor to WBTC while remaining completely permissionless and decentralized. If the launch is successful, the ability to freely and securely use Bitcoin in Ethereum DeFi platforms could potentially affect a breakthrough in the crypto world.

Four Ways to Earn in the Threshold Network

There are four roles by which T token holders can earn in the network: Staker, Liquidity Provider, BTC/tBTC User, and Token Holder.

A three-tiered DAO system governs the Threshold ecosystem. It is the key to keeping the ecosystem decentralized. Each tier holds the other two accountable, while also performing its individual responsibilities within the governance structure. In simple words, the three tiers work in the same way as checks and balances do in a centralized authority. The current value of the total treasury holding of Threshold DAO is approximately $38 million. Let’s take a detailed look at the three bodies: Staker DAO, Token Holder DAO and the Elected Council.

The Staker DAO consists of holders who stake their T tokens on the network. It’s responsible for, delegate voting, executing proposals, and submitting proposals on-chain. This DAO has the core decision power in the network, as stakers run decentralized nodes to verify transactions on the network. The voting power of stakers is determined by the size of their stake.

The Token Holder DAO consists of T holders who deposit into tBTC coverage pools. Just like the Staker DAO, they also have to delegate votes, submit on-chain proposals, and execute the proposals. The Token Holder DAO also manages the Treasury and makes T mining decisions, and is empowered to veto proposals from the Staker DAO to maintain accountability in the network. It’s expected that in the future, it will also be responsible for electing and removing Council members.

The Elected Council DAO has nine seats. Four of these seats are for Keep Network community members, another four for NuCypher community members, and one seat is for a mutually elected independent member. In the future, Council elections will draw nominees to the Elected Council from the united Threshold community. The Council is responsible for setting staker rewards. It can also veto harmful proposals in order to maintain accountability and ensure that the network remains decentralized.

In line with the overall bearish trend that has sent crypto assets’ market caps falling, the Threshold Network market cap fell from an all-time high (ATH) $859.9m to $300.25, a 65% decline in just three months. 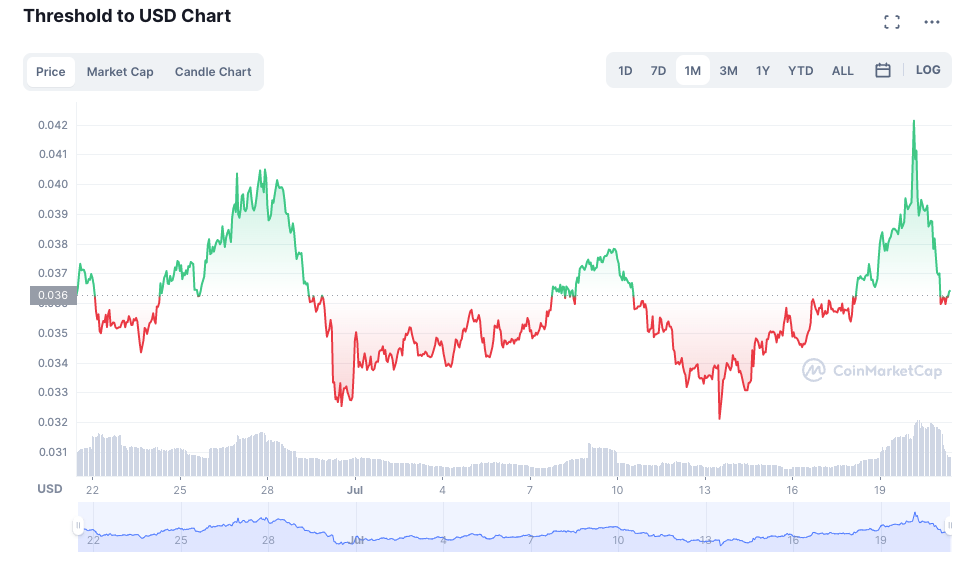 Unluckily, T cryptocurrency was launched in a year when crypto markets have witnessed one of the largest price corrections in history. Since the crypto market sentiments continue to remain in the “extreme fear” zone, due to uncertainties, it isn’t easy to predict T’s future price. However, Threshold Network’s revolutionary potential for solving security concerns and bridging the gap between Bitcoin and other blockchain networks puts the T token in a sweet spot. The Threshold price may rise sharply after the launch of tBTC v2.

Additionally, the network has a well-defined progression path, and plans to further boost community-driven decisions. While several crypto networks that promise to offer decentralized services are actually centralized in structure, Threshold offers a truly decentralized platform. If the tBTC v2 launch is successful, it will open a whole new stream of earnings for Bitcoin holders planning to make the most of DeFi growth without compromising the ownership of their asset. This will also potentially push the T token price upward in the next bull run in crypto markets. Price Prediction is bullish on the token, expecting it to rise to an average of $0.086 in 2023 and surge to $0.50 by 2027.

The price trends indicate a bearish trend that’s likely to continue in the coming months. But considering Threshold Network strong fundamentals, crypto users may consider investing in this crypto for the long term. However, it’s imperative to always do your own research before making any investment decisions.

How to Buy Threshold Network on Bybit

Users can check Threshold crypto's live price data and buy it on Bybit, which offers the T/USDT pair for spot trading. Simply follow the steps below to buy the Threshold token on the Bybit exchange.

Step 3: Head to Trade → Spot Trading → T/USDT and you’ll be redirected to the trading terminal.

Step 4: On the right panel of the trading terminal, you can buy the Threshold token with USDT. 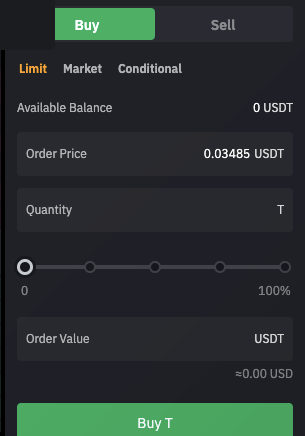 Threshold Network is an ambitious blockchain which aims to remove at least two big limitations of the crypto verse. First, Threshold’s cryptographic services empower users with absolute security and privacy. Secondly, the network offers a truly decentralized and trustless way for Bitcoin holders to trade and invest their assets on Ethereum-based platforms. With the upcoming launch of the tBTC v2 Bridge, the untapped potential of both Bitcoin’s liquidity and yield opportunities on the Ethereum network promise to revolutionize the crypto space.