What Is Telcoin? A Beginner’s Guide to Smarter Remittances

The world of cryptocurrency has seen its ups and downs, yet the enthusiasm among crypto traders is not waning anytime soon. And why should it?

Blockchain developers around the globe using crypto coins to bring innovative solutions to our everyday problems are now driving demand for cryptocurrencies more than ever before. That raises the question of what exactly Telcoin is all about and how does it seek to change the world for the better?

Telcoin is a decentralized cryptocurrency, an ERC-20 token based on the Ethereum blockchain. An open-source project aimed to provide users with a low-cost, efficient, yet secure experience for users to send digital remittances via mobile platforms and e-wallets. TEL is the native cryptocurrency, and it is used in the Telcoin ecosystem for making payments.

Developed in 2017 by a Singapore-based organization, Telcoin has declared its goal to make money transfer smarter than before. Even with all the technology around us, wiring money internationally is a fragmented experience that ends up taking a lot of time — in addition to a lot of money in the form of transaction costs and levies.

Telcoin seeks to act as a bridge between fiat currencies and the crypto world by leveraging blockchain technology to make money transfers instantaneous, without much in the way of transaction costs.

Thus it’s no surprise that the remittance industry is at the top of Telcoin’s priority list, where it seeks to provide an alternative from Western Union. It supports numerous e-wallets and other mobile money platforms with the target of partnering with major telecommunications titans like AT&T, and Verizon.

By collaborating with multiple e-wallets and telecommunications companies, it strives to make mobile transfers more seamlessly and to reach a broader audience with a contactless service. The team behind Telcoin believes they have the perfect recipe for bringing the most hassle-free experience for users to send money.

How Does Telcoin Work?

Telcoin is built on the Ethereum blockchain and leverages its best features to its advantage. Instead of using validators for transactional consistencies, it uses the PoC (Proof-of-Concept) approach. Thus, before validating any transaction, it verifies whether or not it has some real-world feasibility.

There are three components to the Telcoin model: network, telecommunications companies, and the people who subscribe to it. It takes care of the wallets and the implementation of the network. As is the case with decentralized cryptocurrencies, their users have total ownership and control over their tokens.

A token owner can choose to directly transfer these tokens from their account to a peer account. These transactions, however, need at least two private keys to be activated, based on Telcoin’s security architecture. The user can increase this requirement if they so desire. This setting is called a multi-signature model and is often used in systems offering a high level of security.

Telcoin’s network distributes Telcoin tokens (TEL) among network operators as rewards. The higher the number and level of Telcoin integration a telecommunications provider have, the higher their token reward. They receive TEL in exchange for the validation services within the network.

Telcoin stands apart from other cryptocurrencies because of its unique features:

Founded in 2017, Telcoin began as a remittance network based on blockchain technology. It was co-founded by its chairman, Paul Neuner, and its CEO, Claude Eguienta. It was developed in Singapore and has found its way into many countries since then. 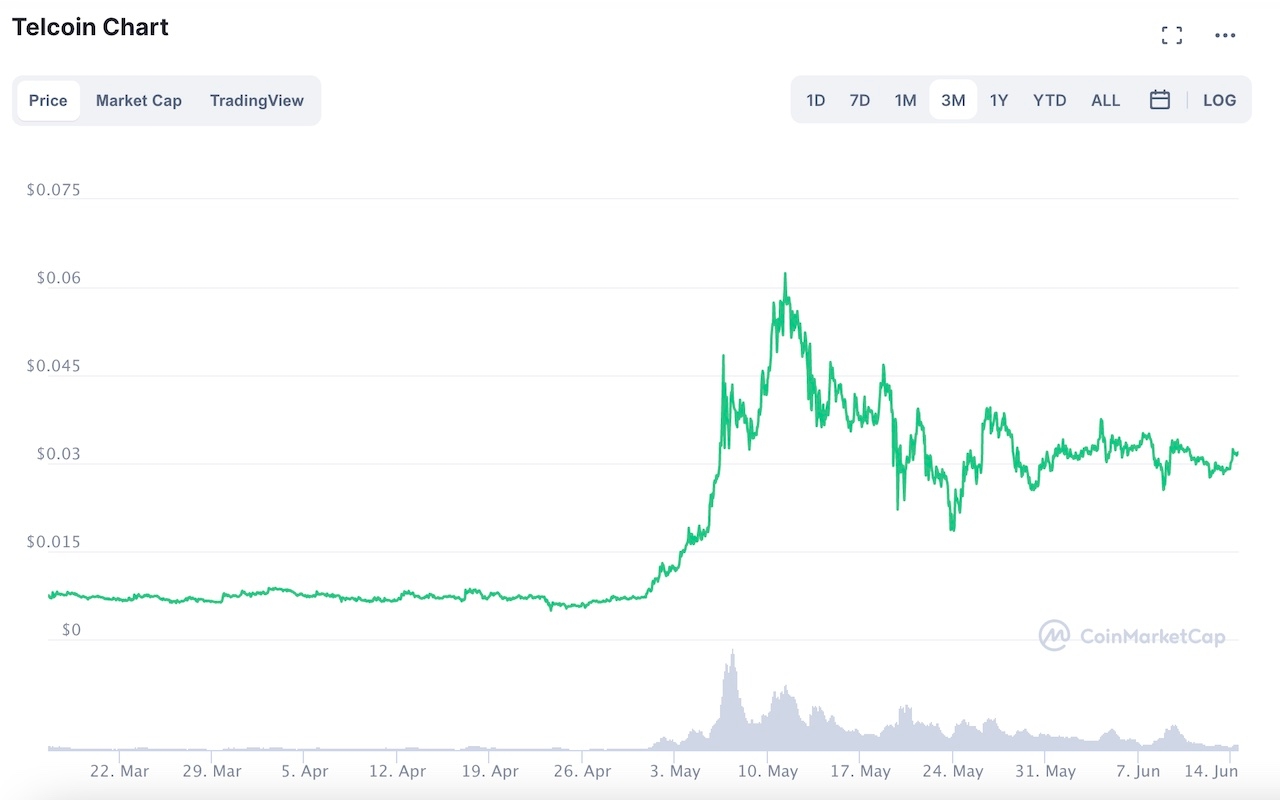 Why Has TEL Seen a Recent Price Jump?

While Telcoin was previously struggling to overcome initial hurdles, 2021 has seen it appreciate quite a lot. Experts believe there could be many explanations for this increase. One reason could be increasing interest in the crypto world, due to nationwide lockdowns. However, a more specific reason can be found in recent legislation from Nebraska (USA) legislature, which has legalized remittances between users with the help of cryptocurrencies and blockchain.

Also, Telcoin’s declared listing on QuickSwap might have something to do with increased enthusiasm among users. QuickSwap’s Polygon is known to be a high-performing, low-cost network, making it possible for people to take advantage of cheaper transactions while getting their hands on TEL tokens.

How To Buy TEL

TEL has been listed on various crypto exchanges offering a wide range of crypto assets. But there is no option to buy it directly, as with other cryptocurrencies. So if you’re planning to buy TEL, you first have to purchase a different cryptocurrency and then use that currency to buy TEL tokens.

Once you’ve bought the TEL tokens, you can receive them in whatever wallet you have attached to the platform from which you purchased them. All Ethereum-compatible wallets support Telcoin, so interoperability with coin storage is never an issue.

Telcoin is researching and developing its V3 technology, an upgrade to its own crypto wallet. It is a part of the Telcoin 2021 Spring Roadmap (April–June). It aims to introduce newer features to the wallet, along with new crypto applications like DeFi services as part of the project Rivendell. The aim is to simplify payments even further.

The V3 technology is supposed to make fiat-to-crypto conversion simpler and faster, something every crypto enthusiast (and non-enthusiast) will surely appreciate.

Apart from that, other current Telcoin projects involve its partnerships with GSMA network operators, GCash, ECPay, KuCoin, Uniswap, Balancer, CoinGate, and Plaid. While GCash aims to build a cashless ecosystem, Telcoin enables it to make that cashless ecosystem even smarter — a true partner indeed.

Currently, it has its hands full, getting as many collaborators as it can around the globe to realize its vision and the Summer and Autumn Roadmap for 2021 should bring nothing but surprises.

The Future of Telcoin

The world revolves around smartphones and considering that digital market penetration is only going to increase in the future, with advancing technologies and increasing awareness of blockchain and cryptocurrency, the road ahead looks bright for Telcoin.

While 2021 may be a celebratory year for Telcoin, it has seen some wild price swings that have led to many cautious voices raising concerns regarding TEL. So if you are planning to invest money in Telcoin, try looking into its price history and understand the market drivers.

The total number of TEL tokens was 1 billion at its launch, and there won’t be any more TEL coins issued once they are all released. Telcoin has already released around half the total TEL in the market through TEL rewards to the parties participating in the network. In the future, TEL’s price will rise considerably with increasing awareness of the problems it addresses, along with its limited availability.

The global remittance market is already clocking billions of dollars and is only expected to rise in the future with increased migration. Even though banks will continue to have a competitive edge, due to the trust people place in them, innovations in blockchain and other technologies will be quick to catch up.

One key reason for slower blockchain adoption among people has been its complexity. Telcoin will be a game-changer if it can successfully simplify money transfers and conversions between cryptocurrency and fiat money.