Saitama Inu: Simplifying DeFi for All

For a token that’s not even two years old, SAITAMA has done an amazing job in terms of gaining popularity and establishing a community. It started as a meme coin, but has now transformed into much more.

In this article, we’ll share some general information about the altcoin and then dig deep into its specifics. Then, we’ll answer the burning question of whether it’s worth buying.

What Is Saitama Inu?

Saitama Inu is a community-driven platform built on the Ethereum blockchain that strives to make it easier for regular people to enter the decentralized finance (DeFi) world and trade cryptocurrencies and NFTs. To that end, they aim to teach people, specifically Gen Z, about financial management, wealth creation and savings via their platform.

Its native ERC-20 token, SAITAMA, is more than just a meme coin. SAITAMA is part of an entire ecosystem: Crypto games, an educational academy, an NFT marketplace, a smart wallet and more, some of which they’ve launched, with the rest to launch soon. In an effort to transition from its meme coin beginnings, Saitama Inu has also rebranded itself as Saitama and updated its logo.

What Is the SAITAMA Token?

The SAITAMA token is the tradable asset of the Saitama platform. It represents your rights on Saitama Inu.

Unlike an NFT, this token is fungible, meaning that it’s not unique and is transferable, so you can exchange it with other tokens. It started as a dog-themed meme token, similar to the famous dog-themed meme coin, Shiba Inu.

Two of the main features of this token are lock liquidity and anti-whale trap.

Lock liquidity is achieved through staking, which freezes a certain percentage of SAITAMA so holders can’t move it. Token holders are incentivized to stake, as the network deducts 2% of each transaction made within the community as tax and shares it as a reward. “Anti-whale trap” means Saitama Inu is coded such that one person can’t hold too many coins. This safeguard minimizes the risk of pump-and-dump schemes.

The SAITAMA token was upgraded in June 2022 to its second version. The V2 token is more secure, sustainable and CEX-friendly. This upgraded token also has a higher dollar value, such that 1 million old SAITAMA tokens are equal to one V2 token. This also means that the new token supply has been reduced to 1/1,000,000 that of the old supply. The old max supply was 100 quadrillion tokens, and with the reduction, the new max supply has become 100 billion tokens.

The biggest feature of the upgrade is that SAITAMA is no longer a meme token, and has now become a utility token. As of August 16, 2022, more than half of its supply has been burned, and nearly 45 billion tokens are in circulation in the market.

The Saitama Inu universe has expanded beyond DeFi and currently includes tokens, a wallet, an app for storing and trading cryptocurrencies, a beta version of an NFT platform, and some other features that we‘ll cover below.

But it’s not done yet. Saitama Inu has an entire road map planned for expansion. Once it’s fully developed, the Saitama Inu ecosystem will include products for education and entertainment, and features for blending the real world with DeFi. 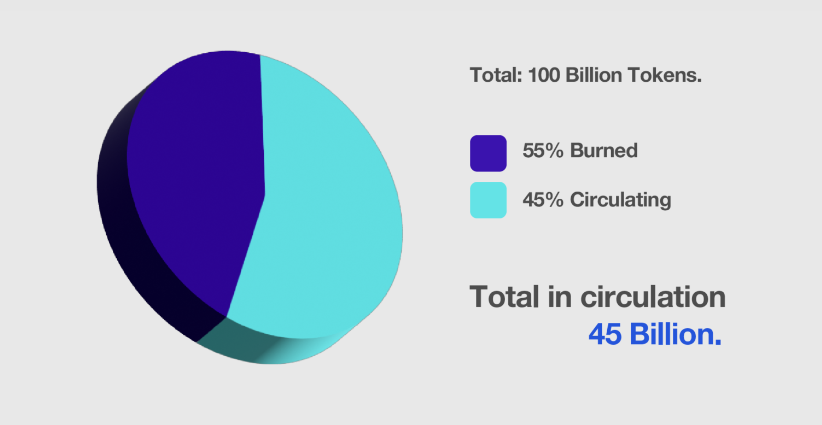 Following are some of the features that are live on the network.

SaitaPro is the mobile and desktop app of the Saitama Inu ecosystem. It’s a noncustodial wallet and a decentralized exchange (DEX), all in a single platform. You can buy crypto from your debit or credit card (this feature is called SaitaPay), stake your tokens or use them for yield farming, transfer to multiple recipients, etc.

It contains a DApp browser as well, supporting various DeFi DApps. The SaitaPro app also supports the NFT platform FANG (more on this later), and features SaitaSwap, which allows you to perform various functions like trading tokens of selected reliable projects, staking and providing liquidity.

The SaitaMask wallet provides basic wallet-related features, such as the ability to move, store, trade and stake cryptocurrencies and tokens. It also features SaitaSwap. With this app, you can view analytics, such as a coin’s performance and token prices. It also shows you all the necessary information about your portfolio’s performance.

SaitaRealty was created to form a decentralized realty ecosystem that benefits poor people while allowing investors to earn profits. Its ERC-20 token, SaitaRealty, also resides on the Saitama Inu network. It works by collecting capital — via investments from SaitaRealty token holders and transaction tax — which can then be used to buy actual (“real world”) real estate.

Once the real property starts earning profits, 50% of the revenue will be distributed for franchising and expansion, while 25% will be allocated to the token holders who’ve staked the tokens. The remaining 25% will be used to support low-income veterans and homeless populations.

This is the NFT platform of the Saitama Inu ecosystem. With it, you’ll be able to use various Saitama tokens to trade NFTs once the final website — which is still in its beta version as of Aug. 2022 — launches.

Following are some features of the Saitama Inu network that are still under development.

This is the main feature which sets the Saitama Inu platform apart from all others. The goal is to produce valuable content on social media channels (and their SaitaPro app) to help you and the next generation of investors make smart choices.

The Saitama Inu platform is working on launching three play-to-earn games, the very first being Wolfcaster, under the Saitama Studios umbrella. Once they’re launched, you’ll have another way to earn tokens and rewards, in addition to staking and yield farming.

Saitama Inu currently resides on the Ethereum blockchain, but the developers are working on creating their own blockchain called SaitaChain. The perks will include improved transactions, more utilities and reduced tax.

This will be the Saitama Inu metaverse where all products and features will come together. Here you’ll be able to shop with SAITAMA assets, buy and sell NFTs, play games and interact socially with other users.

There are two main similarities between Saitama Inu and Shiba Inu: They’re both dog-themed ERC-20 tokens on the ETH network, and each one started as a meme coin but has since transformed into a utility token with various use cases.

The major difference between these two altcoin platforms is that Saitama Inu has an anti-whale trap, while Shiba Inu doesn’t.

Saitama Inu is also more transparent, in the sense that it’s made its road map, team members and other such information public, whereas Shiba Inu keeps it hidden. Such details can affect investors’ confidence in a cryptocurrency. However, Shiba Inu has a much stronger community following, having been in the market longer.

SAITAMA’s price has increased significantly after the token upgrade, due to the shortage of the token’s supply. Its all-time high (ATH) price (for its V1 token) was $0.0000002777, while its ATH price for its V2 token is $0.007825. However, following the bearish conditions in the crypto market, its price has dropped to around $0.003. That said, its road map is promising, with unique features that the next generation will appreciate.

Some experts predict that SAITAMA’s price will increase after the token upgrade, since the shortage of a token’s supply increases its demand. 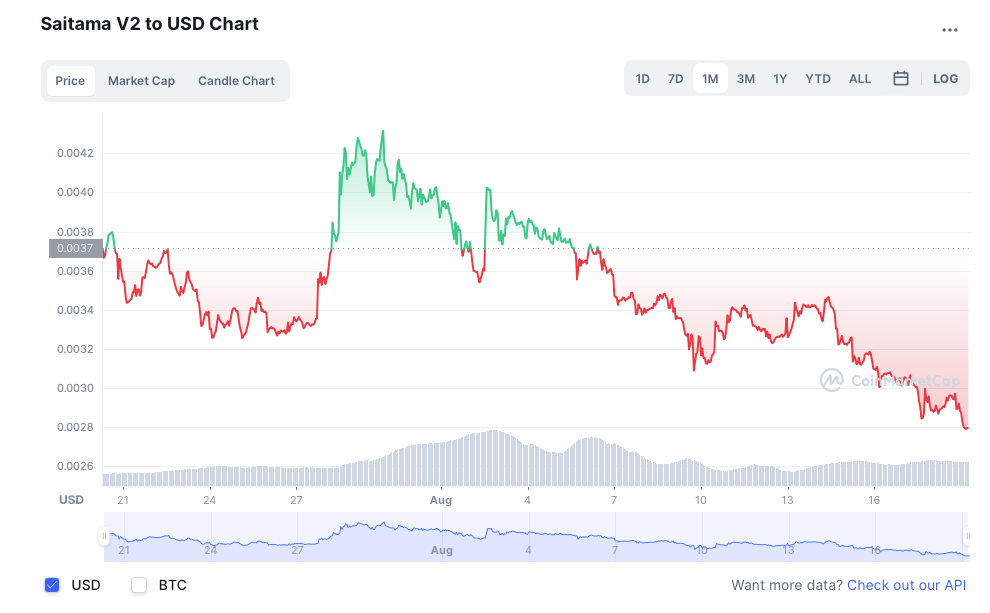 PricePrediction forecasts that SAITAMA will rise to nearly $0.012 by 2025. Telegaon has a similar bullish outlook on the SAITAMA price, predicting it to hit the $0.01 cap by 2025.

This information in no way represents investment advice. Always do your own research, and check out third-party sources before deciding to invest in this altcoin.

Where to Buy Saitama Inu (SAITAMA)

SAITAMA is listed on multiple cryptocurrency exchanges. You can use any of them to invest in this altcoin, including its official DEX SaitaSwap, other DEXs like ShibaSwap and SushiSwap, and centralized exchanges (CEXs) like Bybit.

Purchasing on Bybit is easy, safe and convenient with its user-friendly interface and multilingual 24/7 customer support.

How to Buy Saitama Inu (SAITAMA) on Bybit

SAITAMA plans on expanding its ecosystem, which has a lot of investors excited. Its road map looks promising and shows growth potential. However, the platform has delayed launching some of its features in the past, such as the SaitamaPro app, which makes others skeptical about whether the altcoin will make it in the long run.

Since Saitama Inu is quite young, we recommend you give it time and watch its movements closely to see if it’s worth investing in.