Qtum: Offering the Best of Bitcoin and Ethereum

The world’s leading cryptocurrency, Bitcoin (BTC), remains a popular choice among crypto users, in part due to the very secure nature of fund transfers and storage on the network. In turn, Ethereum (ETH) retains its large lead in the market as the biggest smart contract blockchain. In 2017, a new blockchain project, Qtum (QTUM), launched its mainnet with the promise of combining the best features of the two leading cryptos. In this article, we provide all the details on this intriguing and novel project.

What Is Qtum (QTUM)?

Qtum (pronounced “quantum”) was founded in 2016 to address two key limitations of Bitcoin and Ethereum, the leading blockchains. In the case of Bitcoin, the limitation was the chain’s inability to support smart contracts and decentralized apps (DApps). In the case of Ethereum, the limitation was related to the way address balances are recorded on the chain. Ethereum uses a balance-tracking model called the account model.

The account model is different from the balance-tracking method, the UTXO (Unspent Transaction Output) model, which is used on Bitcoin and several other leading blockchains. While Ethereum’s account model is purported to be easier to conceptualize than the UTXO model, there are concerns about its security and scalability. In essence, Bitcoin’s UTXO model of recording and keeping track of address balances is widely believed to be more secure and scalable than Ethereum’s account model.

Qtum offered a solution that was based on the UTXO balance model while also having smart-contract functionality. It did so by devising a multilayer system that eloquently combined the advantages of UTXO and smart contracts.

How Does Qtum Work?

The Basic Architecture of Qtum

Overall, the Qtum network has a three-layer architecture to power its operations. The layers are:

1. The base layer, where network addresses are maintained using the UTXO model, just as on Bitcoin

2. The Account Abstraction Layer (AAL), which acts as the connecting medium between the base layer and the Virtual Machine (VM) layer above it

3. The Virtual Machine (VM) layer at the top, where all smart contract processing occurs 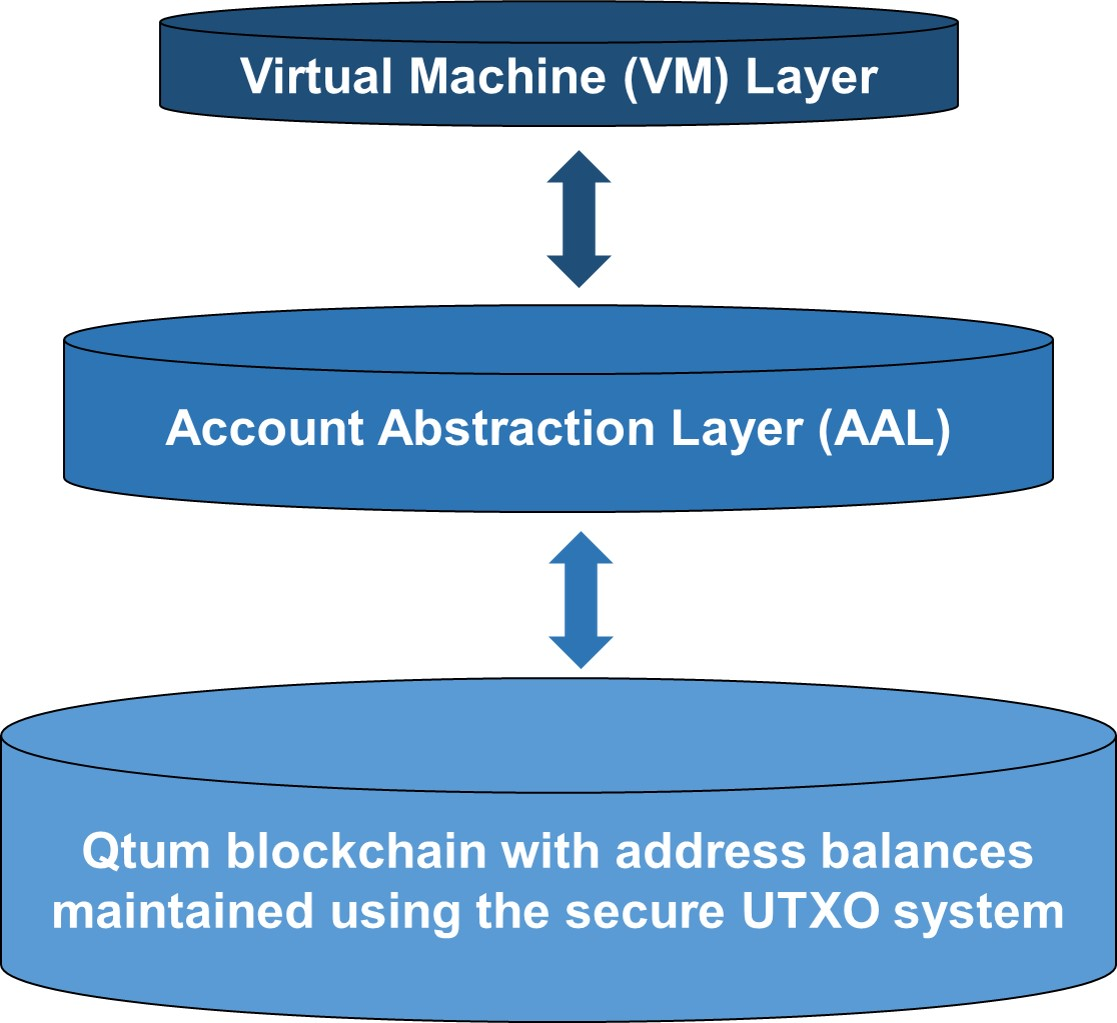 The middle layer, the AAL, is an important element of Qtum’s architecture that allows it to keep smart contract code execution on the VM layer and pass the finalized account balance values to the base layer for record-keeping in the UTXO format.

The VM layer of Qtum is capable of supporting multiple virtual machines simultaneously. Much of the processing on this layer is currently based on the Ethereum virtual machine (EVM). This allows Qtum developers to create smart contracts in the Solidity programming language.

Additionally, the VM layer also supports Qtum’s very own x86 virtual machine. A big advantage of x86 over EVM is its ability to support development in a variety of programming languages, including Python, Rust, C++ and more.

Qtum uses a unique block validation method called mutualized proof of stake (MPoS). A key feature of MPoS is that the block rewards are split between the node that has successfully validated a new block and the nine previous successful block validators. Both the new block’s validator and the validators of the nine previous blocks get an equal share of the block reward. Additionally, the distribution of some portion of the reward is delayed by 500 blocks.

These mechanisms are designed to enhance the security of the Qtum blockchain and minimize the likelihood of hacking attacks.

Another unique feature of Qtum’s block validation method is offline staking, introduced in August 2020. Qtum’s offline staking is a variation of the delegated staking widely used by many other delegated proof of stake (DPoS) platforms. Under the offline staking model, any Qtum user may delegate staking rights to a full validator node on the network. The full node is called a super staker.

What makes Qtum’s offline staking different from other delegated staking formats is the fact that delegator nodes don’t have to give up the ownership of their QTUM funds. Instead of transferring the funds to their preferred super staker, users can delegate their Qtum web wallet address reference while retaining control of the funds.

Offline staking is a flexible way for any Qtum user to earn a passive income. Delegators don’t need to be online or use any computing resources to participate in block validation on the network. All they need to do is to delegate their staking rights once for a fee, via a smart contract, and then sit back and wait for those coveted rewards.

Qtum’s governance process involves multiple parties, such as QTUM coin holders, developers, block validator nodes and community members, among others. On the majority of other proof of stake (PoS) blockchains, governance voting is restricted to coin holders, whereas on the Qtum network other key stakeholders can have a say in the direction of the project by submitting proposals and taking part in the formal voting procedure.

The chain’s governance voting mechanism, called the decentralized governance protocol (DGP), is based on smart contracts that help to automate governance participation for all of the diverse stakeholders with voting rights.

Qtum is a unique project in many ways. First, there’s hardly any other blockchain that has tried to harness Bitcoin’s UTXO model within the smart contract environment. Qtum’s AAL is a novel technology that’s among the first to tackle this task.

Finally, Qtum’s DGP-based governance model is unlike many others in the industry. It gives formalized, smart contract-based voting rights to a variety of key stakeholders of the project.

In October 2019, Qtum underwent the FastLane upgrade, introducing Qtum 2.0 — an improved version of the original blockchain. While technically Qtum 2.0 may be called a hard fork of the original chain, the purpose of the upgrade was not to create a new network, or a different cryptocurrency. Instead, the goal of Qtum 2.0 is to introduce functional improvements and pave the way for more advanced features in the future.

Upon its launch, Qtum 2.0 introduced several technical changes, such as an upgrade to the latest version of the EVM and the difficulty adjustment for block validation to reduce block time. Ten months after the launch of Qtum 2.0, the offline staking functionality was activated on the mainnet. Future useful features include chain-cloud integration and the management of confidential assets. 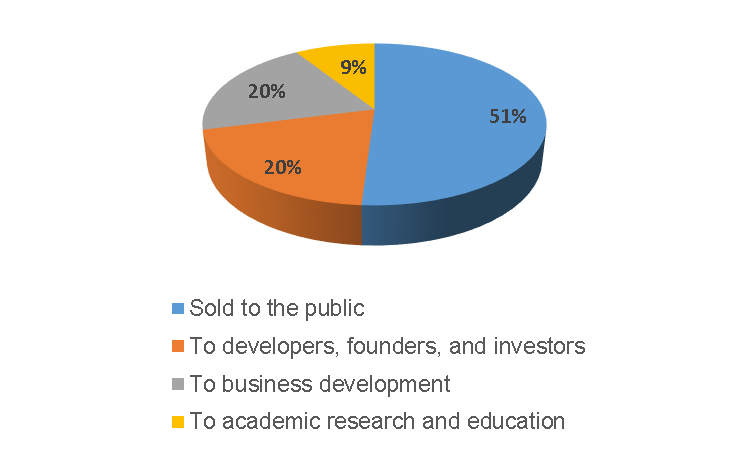 In addition to the initial 100 million tokens, more QTUM have been issued as rewards for block validation on the network. The initial reward was set at four QTUM per block, with a mandatory halving of the block rewards every four years. Per the chain’s reward issuance schedule, the block rewards are expected to fizzle out by around 2045. At that point, QTUM's total supply will have reached the coin’s maximum specified supply of 107,822,406. As of this writing (26/7/2022), QTUM’s circulating supply is around 104 million.

During its initial months on the market in mid-2017, the QTUM coin traded at around $5–$15. In January 2018, QTUM price momentarily spiked to $94.67, its highest level ever, during a market-wide rally. That price was then replaced by the yearlong crypto winter of 2018.

At the end of the crypto winter, in December 2018, QTUM price was down to around $1–$3. The coin traded roughly within this range until 2021, when it underwent two price spikes in May and November, similar to many other altcoins on the market. The crypto market’s multi-month decline from its November 2021 peak didn’t spare QTUM, either. Similar to the wider market, QTUM experienced a precipitous drop, from $17.84 on November 9, 2021, to around $2.60 in mid-June 2022. 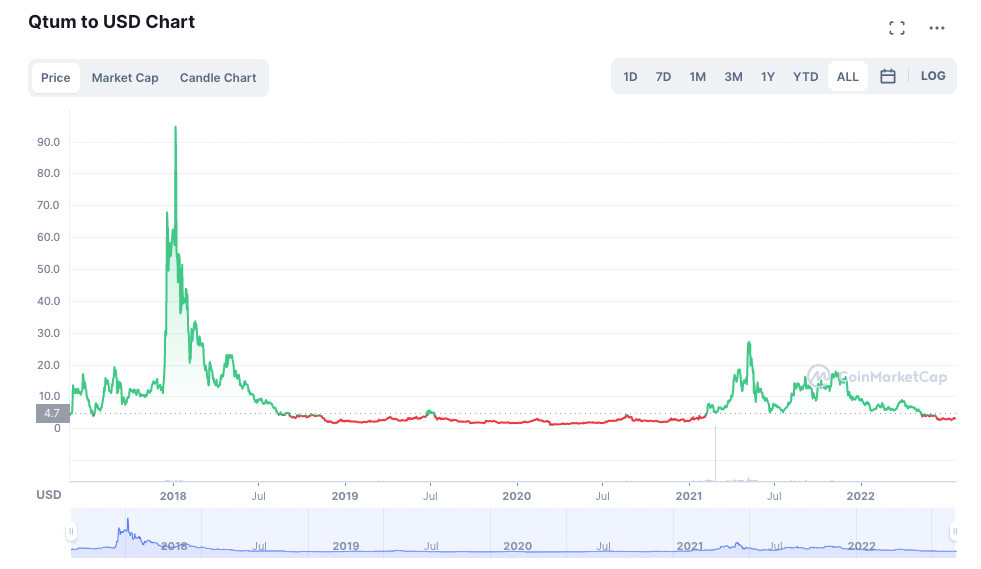 This decline was nothing unusual in the market carnage that unfolded between late 2021 and mid-2022. However, since mid-June 2022, the market has been showing initial signs of slow recovery against the backdrop of continuing panic and hysteria in the news. 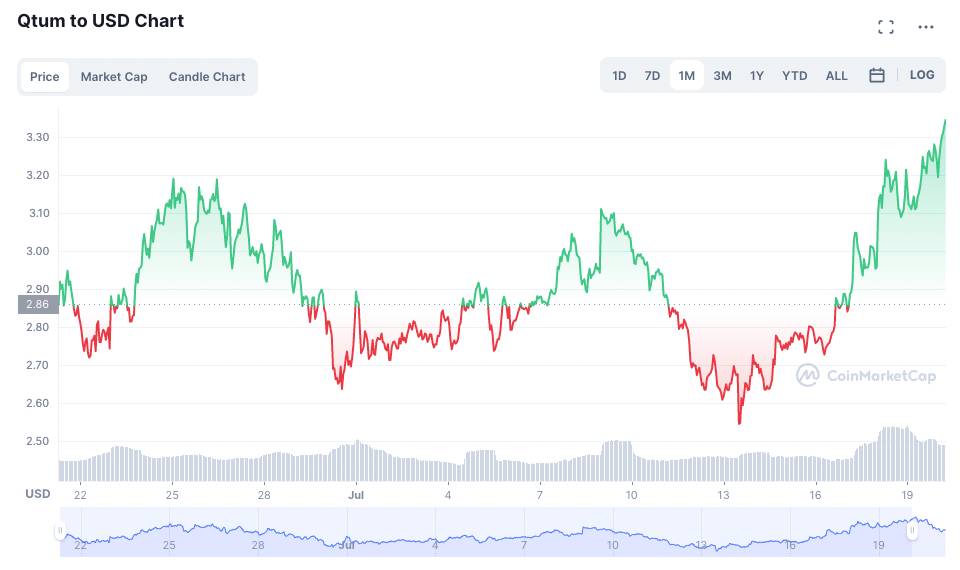 While it’s too early to make a confident conclusion from this initial, and possibly fragile, price recovery, the fact that QTUM has recovered better than the overall market is already an indication of the coin’s inherent potential.

QTUM is based on solid business fundamentals, offering a secure and scalable platform for businesses to host their DApps. As such, the coin is likely to continue to outperform the overall market, and represents a good investment.

At the same time, we will stop short of declaring it to be among the very best coins on the market. Although QTUM has potential, particularly for the enterprise environment, the project has yet to clearly articulate its value proposition in simple terms.

The project’s PR and communications are rich with technical detail and lengthy discussions of intricate technicalities, such as the x86 VM’s functionality. At the same time, Qtum would benefit greatly from more focus on articulating its advantages to business, rather than technical, users.

Where to Buy Qtum

You can buy the QTUM crypto on Bybit. The coin can be easily swapped with USDT on the Bybit trading platform. Within the trading interface, on the right side of the screen, you will see the Buy button.

Under this button, specify the amount of QTUM you’d like to purchase. The amount of USDT to pay will be immediately shown. When ready, press the Buy button to carry out your transaction.

By combining the security of Bitcoin’s UTXO model with smart contracts, Qtum has created a powerful platform that should attract the attention of the business world. The upgrade to Qtum 2.0, which has improved the platform’s security features and paved the way for enhanced functionality, should further raise the project’s profile.

However, it remains to be seen to what extent Qtum will be able to make inroads in the B2B world. The project has great technical parameters and potential business use cases. The main goal for the Qtum team now is to clearly articulate these advantages to its primary target audience — the business community.