What Is Lido DAO Token (LDO)?

The long-awaited upgrade to ETH 2.0 has solved many of Ethereum’s ongoing challenges. However, Eth2 is still in its early phase and grappling with a number of issues. For example, in order to become full validators, users need to stake multiples of 32 ETH. Moreover, any ETH that’s staked is locked, and can’t be used elsewhere within the duration specified.

Lido DAO aims to solve problems for Ethereum 2.0 through noncustodial staking. Since its launch in December 2020, the liquid staking solution has shown considerable potential. With its derivative token, stETH, Lido DAO allows ETH locked in the initial phase to be staked into other protocols. The Lido DAO network is dominating the ETH 2.0 staking market with over 80% in market share, and its native token, LDO, is performing well with constant ups (green candlesticks) on its chart. LDO has gone from its initial pricing of around $1.50 to its all-time high of $18.62, recording an increase of over 1,200% within a year. 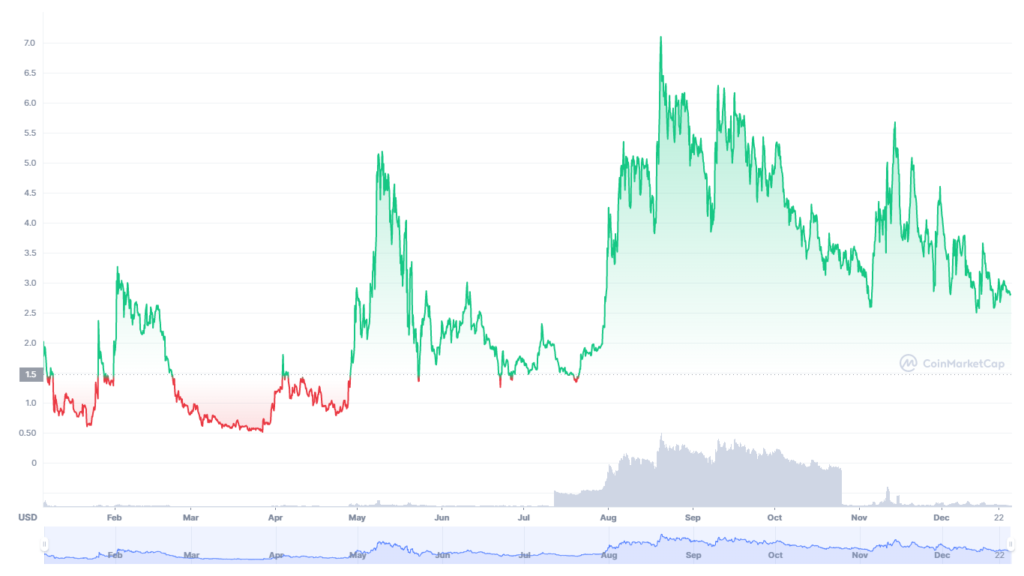 What Is Lido DAO?

Lido DAO (decentralized autonomous organization) is a liquid staking solution available on ETH 2.0. Since the initial staking of Eth2’s Beacon Chain locks the assets, Lido DAO allows assets to be liquified and used for other protocols. The term liquid staking refers to the act of receiving liquid tokens in return for depositing tokens. Liquid tokens can be used to stake other blockchain protocols.

Founded in December 2020, a few weeks after the launch of ETH 2.0, Lido is governed by a DAO. Some key members of Lido DAO are P2P Capital, KR1 and Semantic Ventures. It’s also backed by renowned investors like Kain Warwick, Banteg and Julien Bouteloup.

Lido DAO has become one of the most popular platforms for liquid staking, reaching over $13 billion in staked assets within a year of its inception. Initially developed with a focus on Ethereum, Lido is expanding to other blockchain networks like Terra and Solana. Staking for Terra and Solana was launched in March and September 2021, respectively.

Another attractive feature of Lido DAO is that it’s decentralized (unlike most other liquid staking platforms). Lido also offers a high annual percentage rate (APR) of 4.8%, 8.1% and 6.6% APR for staking Ethereum, Terra and Solana, respectively.

LDO is the Lido DAO governance token which facilitates the staking platform’s goal of building a trustless liquid staking service. It drives the decentralized ownership and decision-making of the independent structure of Lido, with governance decisions in the Lido DAO community conducted based on LDO.

LDO holders are allowed to cast their votes in any decision that will shape the future of the platform. This enables everyone to have their say, thereby maintaining decentralization.

What Is LDO Used For?

Primarily, LDO provides governance rights to the Lido community’s members. Anyone holding LDO has the right to vote in any decision-making process, with the amount of LDO they stake determining their voting power.

Other use cases of LDO tokens include helping with the management of fee parameters, and the addition or removal of any node from the network.

How Does the Lido DAO Platform Work?

The process of liquid staking on the Lido DAO platform can be distributed into three major parts: staking, minting and DeFi.

The Lido DAO platform allows users to stake as much (or as little) ETH as they wish on the Beacon Chain without locking them, collecting a 10% fee for carrying out the process.

The key features of Lido DAO are as follows.

Lido’s staking platform allows users to connect with a crypto wallet and stake any amount of ETH. As mentioned, the exchange rate for ETH to stETH is 1:1, with a transaction cost of $38.40 and a reward fee of 10%, deducted from the total sum of rewards.

Curve is an exchange liquidity pool useful for stablecoin trading on Ethereum which allows stETH to be acquired and used.

The MakerDAO platform allows users to connect to a crypto wallet and use stETH tokens as collateral for obtaining loans.

Through this program a referrer can earn 1% of the total ETH staked through their link in LDO tokens. Lido DAO has started a whitelist mode for referral programs, meaning that only Lido DAO-approved partners receive rewards.

At the time of this writing, the live price of the LDO token is $2.95, with a 24-hour high and low of $2.99 and $2.69, respectively. With a live market cap of approximately $69 million, LDO has a 24-hour trading volume of nearly $4 million. Of the total 1 billion LDO available, over 24 million are currently in circulation.

Although it’s a new entry in the crypto market, the LDO token reached an all-time high of $18.62 within its first year. The highest it’s reached on the chart is over $7 in August 2021. 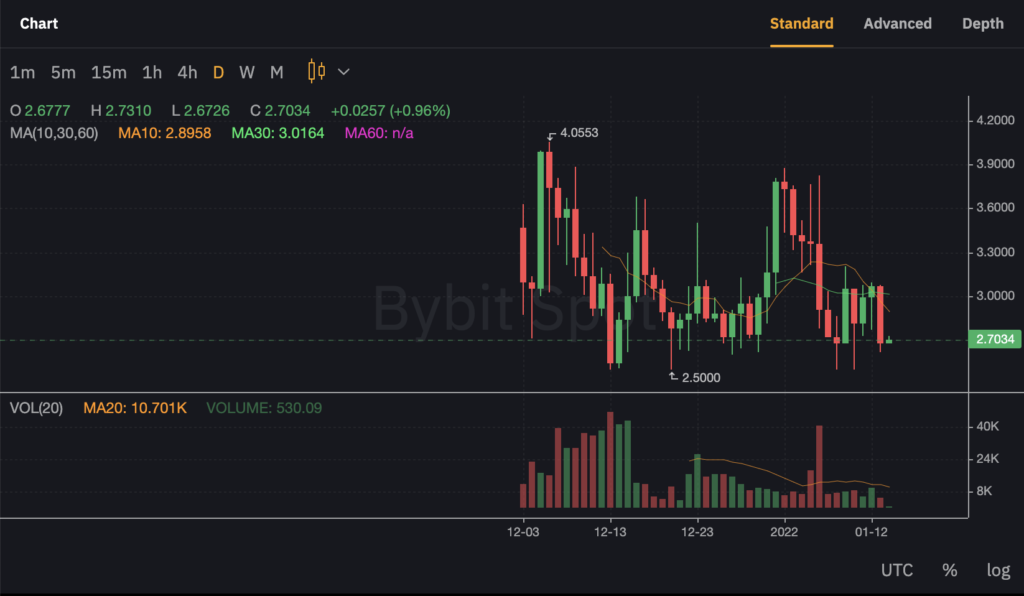 Currently, only 0.4% of LDO tokens are airdropped and distributed among early adopters (i.e. holders and stakers of stETH, and users who exchanged stETH:ETH and yvsteth for Uniswap LP tokens before 28 December 2020). The founding members have 64% of the tokens, locked for one year and vested from there. The total number of LDO tokens is allocated to different segments of the Lido DAO community as follows:

Pros and Cons of Lido DAO

Like any other protocol, Lido DAO has its pros and cons.

Unlike most other liquid staking platforms, Lido DAO is completely decentralized. Anyone who owns LDO has the right to vote for the future of Lido.

Lido DAO’s platform allows any quantity of Ethereum 2.0, Terra or Solana to be staked and withdrawn. Users don’t have to stake multiples of 32 ETH, unlike the ETH 2.0 Beacon Chain.

As a MiniMe ERC20 token, LDO is more costly to transfer than most other ERC20 tokens. Lido must go through its balance history to ensure that the vote-transfer-vote exploit is not in play, as it increases the overall cost.

Although Lido DAO is a secure platform, there are potential security risks associated with it. To begin with, the Lido code is open-source and may thus contain smart contract bugs which can be exploited.

Lido is created on Eth2, which is still under active development. Hence, if any risks are identified on ETH 2.0, they could impact Lido DAO. Lido also faces adoption risks: if ETH 2.0 isn’t adopted by users at the rate that’s expected, there could be significant fluctuations in ETH and stETH prices.

The Lido DAO (LDO) token has lately been experiencing a bearish run. After reaching $7 in August 2021, the coin is currently hovering around $2.75. Although the price of LDO is directly dependent upon the adoption of ETH 2.0, experts suggest that LDO will experience a bullish market over the next few years due to Ethereum’s dominance in the crypto market, since Ethereum is the only long-standing competitor of Bitcoin.

According to WalletInvestor, LDO coin is a good short- and long-term investment which could soon surpass $6, and $21 by 2026, giving an almost 700% return on investment. DigitalCoin predicts that the coin could exceed $4 this year and $11 by 2028.

How Does Lido Pay Out?

Lido stakes users’ assets in Ethereum 2.0. All deposits made by users are returned to them in the form of the Lido native asset, stETH. The actual ETH deposits are pooled together by Lido and staked through a trusted set of node operators on ETH 2.0. Thus, Lido receives rewards for staking from Ethereum, which are then distributed among investors.

There’s one burning question for Lido’s current and potential investors: Is Lido secure? Lido DAO is associated with several risks, such as smart contract bugs, adoption risks and technical risks. But it’s still considered one of the most secure staking platforms for some compelling reasons:

Lido DAO is audited by several leaders from the blockchain security domain, including Quantstamp, MixBytes and Sigma Prime.

You can easily buy LDO coins using crypto exchanges. Before doing so, be sure to vet each platform to select the right choice for you. Here’s how you can buy LDO using Bybit, an established and easy-to-use cryptocurrency exchange.

Step 1: To begin with, you’ll create a verified Bybit trading account. If you’re an existing trader, please proceed to step 2.

Step 2: Log in and go to the Fiat Gateway.

Step 3: On the Fiat Gateway, select the currency you want to purchase.

Step 4: Enter either the number of LDO you wish to purchase, or the amount of money you want to spend.

Step 5: Fill in the details and select your preferred payment mode (various options such as Mastercard and Visa are available).

Step 6: Confirm your purchase, and the LDO will arrive in your account shortly.

Thanks to Bybit’s user-friendly interface, it’s easy to purchase LDO. As mentioned earlier, you can use LDO for trading and/or governance purposes on Lido DAO.

Lido DAO has seen tremendous growth in its initial year. Starting with a focus only on Ethereum 2.0, Lido has since expanded its outreach to Terra and Solana. As more users adopt ETH, the dominance of Lido DAO in liquid staking will increase — thereby leading to new partnerships, announcements and projects. With our largely positive outlook on Lido DAO (LDO), we’re eager to see how the platform performs in the months and years ahead.