Legend of Fantasy War (LFW): What Is It?

Blockchain gaming, or GameFi, is the latest trend revolutionizing microtransactions and revitalizing the gaming industry. Blockchains and non-fungible tokens (NFTs) are enabling a new kind of gaming model based around asset ownership that uses a “play-to-earn” structure.

What Is Legend of Fantasy War?

Legend of Fantasy War is a 3D turn-based role-playing game built on the blockchain. It features an engaging storyline for players of all types, whether they prefer playing games solo or with others. The game includes a token called LFW and collectible items that make up its unique ecosystem. All in-game items are NFTs that can be traded in the Legend of Fantasy War NFT marketplace.

In the world of Legend of Fantasy War, players lead a group of young warriors from different sects and clans who use martial abilities to fight enemies, help the people of this world uncover its mysteries, and win worthy rewards.

The game is the product of a blockchain team working together with traditional game developers who have extensive experience in the industry. The developers have prioritized building an action, visual and landscape system using 3D graphics that look and feel realistic. They’ve also focused on creating fun quests and activities for players, and ensuring the scalability of multiplayer options.

GameFi projects and play-to-earn (P2E) games have become the hottest commodities to come out of the cryptoverse in recent months. GameFi — a portmanteau of “game” and “finance” — refers to the gamification of financial systems to create profit for players of play-to-earn games.

What all P2E games have in common, including Legend of Fantasy War, are in-game items such as weapons, tokens, costumes, avatars and land, which are represented as NFTs. By ‘blockchainizing’ in- game items, players can acquire these NFTs through gameplay, and they have the option to trade or sell them on NFT marketplaces for a profit.

LFW, the Native Token of Legend of Fantasy War

LFW, an ERC-20 token, is the native token of Legend of Fantasy War. It was launched on Ethereum, with a maximum supply of 200 million LFW coins, in an ICO held in October 2021 which reportedly sold 2.8 million tokens. As of December 2021, 7.2 million LFW coins were in circulation, according to CoinMarketCap.com.

The remaining supply is set aside for the team, advisors, in-game incentives, governance rewards, staking rewards, and marketing & partnerships.

How Does Legend of Fantasy War Work?

The game is set in the year 1139 CE in a town where martial arts masters from all over the world have gathered for an annual tournament. However, the tournament is interrupted on the first day by unknown warriors who attack everyone — which starts the fantasy war.

Players transform into heroes who can fight the evil hordes, complete missions for rewards, level up their skills, recruit other players to form clans, and form alliances or battle with other clans. The ultimate goal in the main storyline is to grow powerful enough, overcome challenges, and uncover the identity of the mastermind behind the fantasy war.

The game includes character customization options that utilize an elemental system. These options include metal, wood, fire, water and earth. Players can use these options to create strong characters with unique abilities.

Each character card has a set of starting attributes and a list of moves. These cards can be equipped with new equipment, items and consumables, on or off the battlefield. Players can create a team of up to five warriors who traverse the 3D universe and fight hordes of henchmen for the BBEG.

According to the Legend of Fantasy War team’s developers, one of the biggest strengths of the game is its community. The game’s in-game ecosystem and NFT marketplace offer a unique way for players and their friends to enjoy rewards together.

What Are LFW Tokens Used For?

LFW is the utility token that powers the Legend of Fantasy War game ecosystem. It has the following utility functions:

In traditional games, players typically spend a lot of money on in-game items such as cosmetic skins, weapons, power-ups, and more. However, in many cases, players don’t actually own these items and in-game rewards.

Legend of Fantasy War wants to provide players with a different experience by using tokens and NFTs to assert their ownership of assets. Instead of spending money, as in traditional games, players can freely earn rewards by simply playing and staking LFW tokens. Their earnings can be traded on NFT marketplaces for a profit.

Legend of Fantasy War has a staking portal where players can stake LFW tokens and NFTs. Players who opt to lock their assets in the staking portal can earn rewards, which they can withdraw at any time. The staking protocol is just another way to encourage players to participate in the game’s ecosystem.

Legend of Fantasy War features a decentralized community governance structure built into the network. Players who hold LFW tokens can vote on governance proposals which determine what features will be added to the game in the future. Players who participate in community proposals receive governance rewards for their time. It encourages players’ ownership of the game, community and ecosystem development.

The game will feature an NFT marketplace where users can trade items collected in the game via peer-to-peer transactions. Players get to decide the value of the NFTs they own. They can earn NFTs by:

Where to Buy the LFW Token 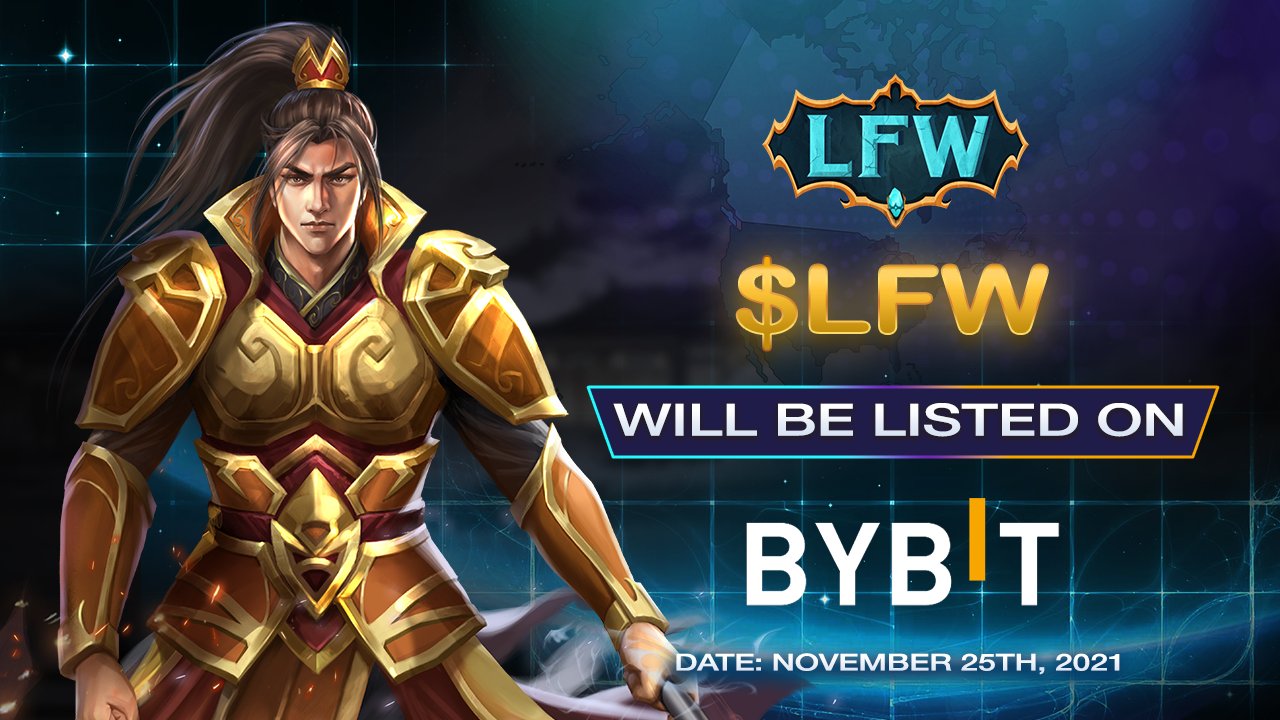 LFW was listed on Bybit in November 2021. Image source: Twitter

LFW tokens are already available on a handful of exchanges. To buy LFW on Bybit, you first need to create an account on the Bybit web app or download the Bybit mobile app (available on Apple iOS or Android).

Once you’ve opened an account and confirmed your identity via KYC (know your customer) verification, you can purchase LFW from the spot market by finding a crypto trading pair containing LFW.

If you don’t hold any crypto assets, you’ll need to buy USDT using your preferred currency via Bybit’s Fiat Gateway. Through the gateway, you can deposit funds into your Bybit account using third-party service providers such as MoonPay, Banxa, XanPool, and more.

After funding your account, simply go to the spot market hub and search for a trading pair that includes LFW (pictured above). Select whether you want to set a limit, market, or conditional order. Click on Buy LFW to execute the trade. It’s that simple.

The Bottom Line on Legend of Fantasy War (LFW)

In summary, Legend of Fantasy War is a 3D turn-based play-to-earn game that was released for testing on web and mobile environments in Q2 2021. According to the company’s road map, the game will be officially released in Q1 2022.

Legend of Fantasy War is an exciting addition to the rapidly growing number of play-to-earn blockchain games. If you’d like to invest in the project, purchase LFW on Bybit to get started today!