What Is IOTA and How Does It Work?

The idea for investing in cryptocurrencies became more prominent as Bitcoin, and other cryptocurrencies started launching with the hope that they would share the same success as BTC. But there was one problem that most of these cryptocurrencies had in common: scalability issues. A solution to this problem came with IOTA.

Today, we’ll learn how IOTA differentiates itself from the rest and understand what it can bring in the future.

What Exactly Is IOTA?

IOTA deviates from blockchain technology and focuses on the technology known as “Tangle” — a special Directed Acyclic Graph (DAG) technology. IOTA’s purpose is to solve the scalability issues in the crypto market and be the backbone of the Internet of Things. The problem with improved scalability can lead to increased transaction fees. Thus, IOTA introduced fee-less transactions, keeping the concept of decentralization in its rawest form.

The network of IOTA consists of many nodes, and each node is directly connected to two other nodes.

Directed in DAG — means that the node connections have only one direction: node X can be directly connected to node Y, but node Y cannot move toward node X.

Transactions in IOTA are also known as Sites. The more nodes that are added to the network, the more secure it becomes.

Other nodes have access to such information and determine if node A is trustworthy or not. The more nodes that are linked to a node, the more trusted it becomes. The newly added nodes are called “Tips” and remain unverified until a new node is directed toward them. Using this line of thinking, the more time a node spends in the Tangle, the more it can be trusted, as new nodes join the IOTA network and more verifications that are linked with it occur.

Judging by this information, if the IOTA network were smaller, an attacker could provide the network with more nodes that could overcome the majority and manipulate the network for their personal purposes. However, the IOTA team launched a node known as the “Coordinator,” which is involved in securing the network just enough so that it makes it practically impossible for such attackers to succeed.

The Problems with IOTA

But doesn’t this make the IOTA network somewhat centralized if the Coordinator node basically controls the network?

The answer is yes.

But the IOTA Foundation has stated that the Coordinator node is going to be removed from the network once the network becomes large enough that no one can afford to control the majority of the nodes.

Despite the fact that IOTA is not actually a blockchain, it still mainly uses Proof-of-Work (PoW) features when it comes to the consensus mechanism of the network.

Nonetheless, mining in IOTA is not the same as in other PoW networks. For example, miners are not awarded with new tokens instead of getting a portion of each transaction fee.

The token used in the IOTA network and IoT is mIOTA (alternately spelled as MIOTA). There is a limited supply of 2,779,530,283 MIOTA tokens, and the circulating supply has reached 100% of this total. Since no more MIOTA tokens can be added to the network, the price of MIOTA is deflationary.

IOTA was founded in 2015 by David Sønstebø, Serguei Popov, Dominik Schiener and Sergey Ivancheglo. Sønstebø is an entrepreneur and was previously involved in the development of a hardware IP company. Popov is a mathematics professor at the University of Campinas in Brazil and is the brain behind the Tangle. Schiener is also an entrepreneur involved with other companies prior to IOTA.

Ivancheglo, who specializes in electronics, is no longer part of the IOTA team because he believes that the goals set by the team when it was initially launched are no longer achievable.

Today, the team has expanded, as there are experts from more than 25 countries around the world working for it.

To develop the IOTA project, the IOTA Foundation held an Initial Coin Offering (ICO) in 2015. Around $500,000 was raised (1,337 BTC at that time). While ICOs today raise much more money than that, they were not very popular in 2015, so at that time, it was considered a success.

Initially, three quadrillion MIOTA tokens were issued. 999,999,999 were sold in the ICO. However, the majority of those tokens were burned over time.

It is worth noting that as time passed, more subunits of IOTA were added by the IOTA team because the additional supply fit the purpose of the IoT even more. 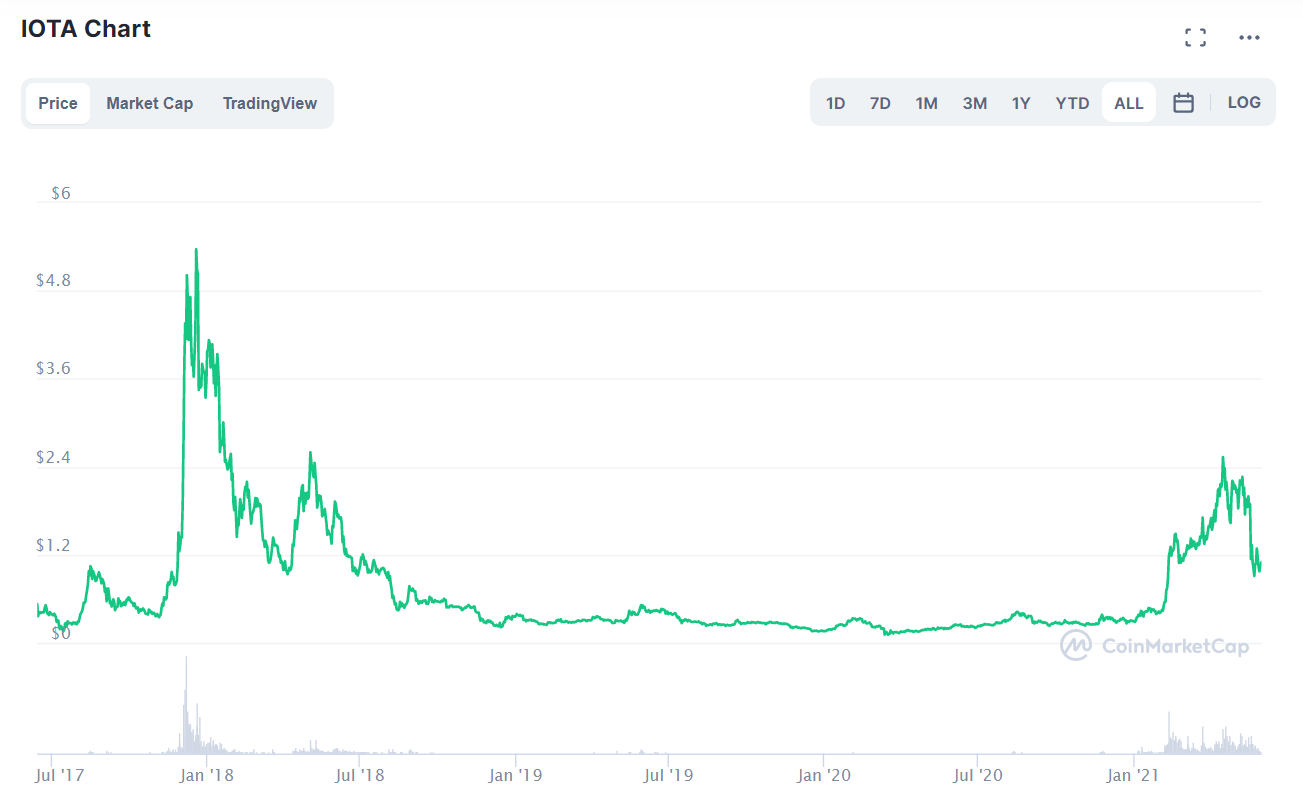 With a price of $1.09 and a circulating supply of 2.78 billion, the market cap of IOTA is around $3 billion. This ranks IOTA at number 34 in the crypto market, based on market capitalization.

Since IOTA is built to sustain the internet of things ecosystem, the projects often revolve around the scalability of IoT. While IOTA may lose a lot of water under the bridge back in 2017, it aims to regain momentum.

In fact, IOTA has been working on a network upgrade to resolve some of the vulnerabilities. Here’s are the projects that did not hinder Schiener’s vision.

IOTA has proved to be useful in providing futuristic services. Such is the case with smart cities, where everything is digital. The Taipei government has cooperated with the IOTA Foundation to implement the idea of a futuristic city in Taipei. By doing so, IOTA would be the power behind this smart city.

Moreover, using the distributed ledger of IOTA in voting or other services would ensure more security, as well as a stronger relationship between the government and its citizens.

Besides smart cities, IOTA has also been involved with the energy industry. IOTA could efficiently manage smart energy used for electric cars due to decentralization. Using MIOTA tokens as a means of payment, people can charge their smart cars in smart charging stations. Such is the case with the Dutch company ElaadNL, which is one of the first to reach an agreement with the IOTA Foundation.

Another field where IOTA could be used is medicine. The IOTA network is working on improving eHealth services so that data is more reliable, secure, and private. Additionally, IOTA can be used in the transportation industry. People can use it to pay for parking spaces, transportation, and ride-sharing.

Last but not least, IOTA can be used for manufacturing as well as the supply chain. Using the technology of Tangle, users can access every piece of information about a specific product, creating as much transparency as possible.

All these features have made it possible for the IOTA Foundation to partner with some of the world’s biggest companies. One of them is Microsoft. Since IOTA plans to power the Internet of Things, Microsoft considers IOTA to be a promising partner in working toward the future of the IoT.

Another IOTA partner is Volkswagen. Since IOTA works on the automotive supply chain and manufacturing, Volkswagen has also decided to use this technology. Another company in the automotive industry, Jaguar Land Rover, has also recently partnered with the IOTA Foundation.

In the electronics field, companies such as Bosch and Fujitsu have become IOTA partners in order to take advantage of the many functionalities that this cryptocurrency offers.

Some of IOTA’s partnerships. Source: IOTA

The Futures of IOTA

IOTA is looking to add several new features to its network. As mentioned earlier, IOTA is planning to remove the Coordinator node soon with a plan it calls Coordicide. This will ultimately remove the centralization aspect of IOTA and make it more efficient.

Once the Coordicide is complete, IOTA also plans to implement a new consensus mechanism in the network known as Shimmer. The Shimmer uses “Mana” as a reward to nodes that perform well in the network.

Another upgrade is something called Chrysalis, or IOTA 1.5. This is also involved in increasing the efficiency of the network.

It is safe to say that if IOTA successfully undergoes all of these intended updates, more companies may want to partner with it. Moreover, it has become more practical every day, with a price that is deflationary due to the limited supply that has been achieved, the price of mIOTA can increase in the long run.