Gods Unchained (GODS): What Is It About?

Blockchain technology has become the go-to foundation for video game developers looking to capitalize on the popularity of the play-to-earn gaming model. According to a survey by Stratis released in November 2021, 64% of UK- and U.S.-based game developers believe blockchain tech will become prevalent in video games within the next two years.

Numerous blockchain-based titles have been released recently. One of the more exciting ones is the Gods Unchained game (native token: GODS). It’s a competitive trading card game developed on the blockchain that’s similar to other games in the genre, such as Hearthstone or Legends of Runeterra. Since it’s blockchain-based, players have actual ownership over their cards, just as if they were real and tangible.

In this guide, we’re going to cover what the game is all about, how Gods Unchained works, how you can use GODS tokens and NFTs, and where you can buy GODS tokens.

What Is Gods Unchained (GODS)?

Gods Unchained (GODS) is a blockchain-based, free-to-play competitive trading card game that rewards you for playing. Players must strategically outsmart opponents by building powerful decks and using combat tactics. Gods Unchained gives players true ownership of all in-game items, meaning they can trade, sell or use their cards in any way they like — just as with real cards.

Gamers reportedly spent $87 billion on in-game assets in 2019 alone. But exactly how much did players receive in return for their purchases? $0. Competitive card games like Hearthstone, Runeterra and Magic: The Gathering Arena are popular, but they don’t give their players tangible ownership over their digital assets. These companies only license cosmetic items such as skins or card decks to players who purchase them.

Gods Unchained wants to shake things up by giving players complete ownership over in-game assets. It mints cards and other assets on the Ethereum network as non-fungible tokens (NFTs) to give players actual ownership. Since NFTs are immutable, the Gods Unchained developers can’t change the value of cards, nerf them, or take them back from players.

The game, which had a beta launch in 2018, is built on the Ethereum blockchain and has a native ERC-20 token called GODS. The token functions as the in-universe currency used for conducting trades and paying for transactions. The platform also uses Ethereum’s smart contract technology to mint NFTs that represent collectible in-game assets. 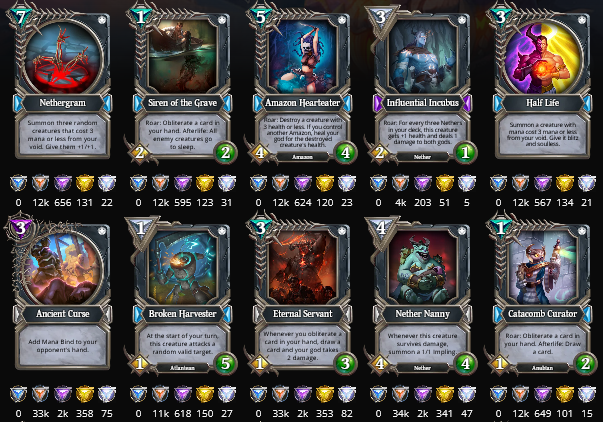 While it’s still a relatively young game, Gods Unchained is often compared to other popular fantasy card games with cult followings such as Magic: The Gathering or Hearthstone. In fact, the game’s development is led by Chris Clay, who was the game director for MTG Arena and an executive at Wizards of the Coast LLC. Clay left Wizards in 2018 to focus on developing Gods Unchained.

In Gods Unchained, players can fight for glory in competitive arenas, win and collect cards by playing matches, buy and sell cards within the in-game marketplace, and build the perfect deck to top leaderboards. The game is completely free to play (though not pay-to-win). It primarily focuses on fair competitive play.

New players start with 140 cards as part of the free welcome so that everyone has various basic decks, and can unlock more by playing and participating in tournaments (whether they win or lose). The game uses a play-to-earn (P2E) model, which basically means players can earn rewards by participating in weekly ranked tournaments.

The P2E model has been proven to work and is shared by several other projects in the GameFi blockchain gaming space such as Illuvium (ILV), Axie Infinity (AXS), Genopets (GENE), and My Neighbor Alice (ALICE).

The biggest selling point for Gods Unchained is that it gives players true ownership over all the in-game items which they collect. These items have a real-world value set by the market, and can be traded on NFT marketplaces, just as traditional printed cards can be bartered in physical card games.

Another big plus is that Gods Unchained plans to use Immutable X to facilitate trades more efficiently. Immutable X is a decentralized exchange that scales trades performed on Ethereum, and provides traders with nearly instantaneous transactions for very low or zero gas fees.

Currently, the Ethereum network can only handle an estimated 150,000 NFT transactions per day at 30% network usage. With Immutable X, the network could theoretically support up to 200 million trades per day.

Immutable X is also noncustodial, which means users will still have complete control over their items and won’t have to trust the exchange’s security and infrastructure.

NFT cards in Gods Unchained aren’t just minted and handed out without some effort from the player — since that would completely congest the Ethereum network! By playing games, players unlock Common Core digital card packs. To turn those cards into NFTs, players must first earn a crafting ingredient called Flux by winning in ranked tournaments.

Once a player has collected enough Flux, they can head over to the Forge and fuse their Core cards together to create higher quality ones that are minted as NFTs on Ethereum and have real-world value. Rare cards naturally have a higher innate value and are more sought after, while basic deThese NFT cards are tradable on the Gods Unchained marketplace.

What Are GODS Tokens Used For?

GGODS tokens are an integral part of Gods Unchained’s play-to-earn foundation. Players can use them to buy card packs from the marketplace, craft card NFTs, and participate in governance initiatives. Players can also stake $GODS tokens to earn rewards.

Where Can I Buy GODS Tokens?

$GODS was released following a successful public sale in October 2021 which raised $35 million. The tokens, whose supply is capped at 500 million, can be purchased from a handful of exchanges, including Bybit.

To buy GODS tokens on Bybit, you first need to open an account on the Bybit web app or the mobile app (available on Apple iOS or Android). The next step is to verify your identity to comply with KYC (know your customer) requirements and remove the trading limits on your account.

Search for GODS on Bybit’s spot market to find a suitable tradings pair (pictured above). If you don’t have any crypto assets, then you can buy USDT using fiat money through the Bybit Fiat Gateway. You can use the gateway to deposit cash into your Bybit account using several third-party services, including Banxa, XanPool, MoonPay, and more.

Once your account is funded, go to the spot market and search for the GODS/USDT trading pair. Choose whether you want to set a market, limit, or conditional order, then click Buy GODS to execute the order.

Gods Unchained wants to change the norm in the gaming industry by giving players complete ownership over their digital assets. The game’s developers plan many fun expansions as part of future updates. To invest in this exciting new GameFi project, purchase GODS tokens on the Bybit crypto trading platform today!