What Is Dogecoin (DOGE) and How Does It Work? 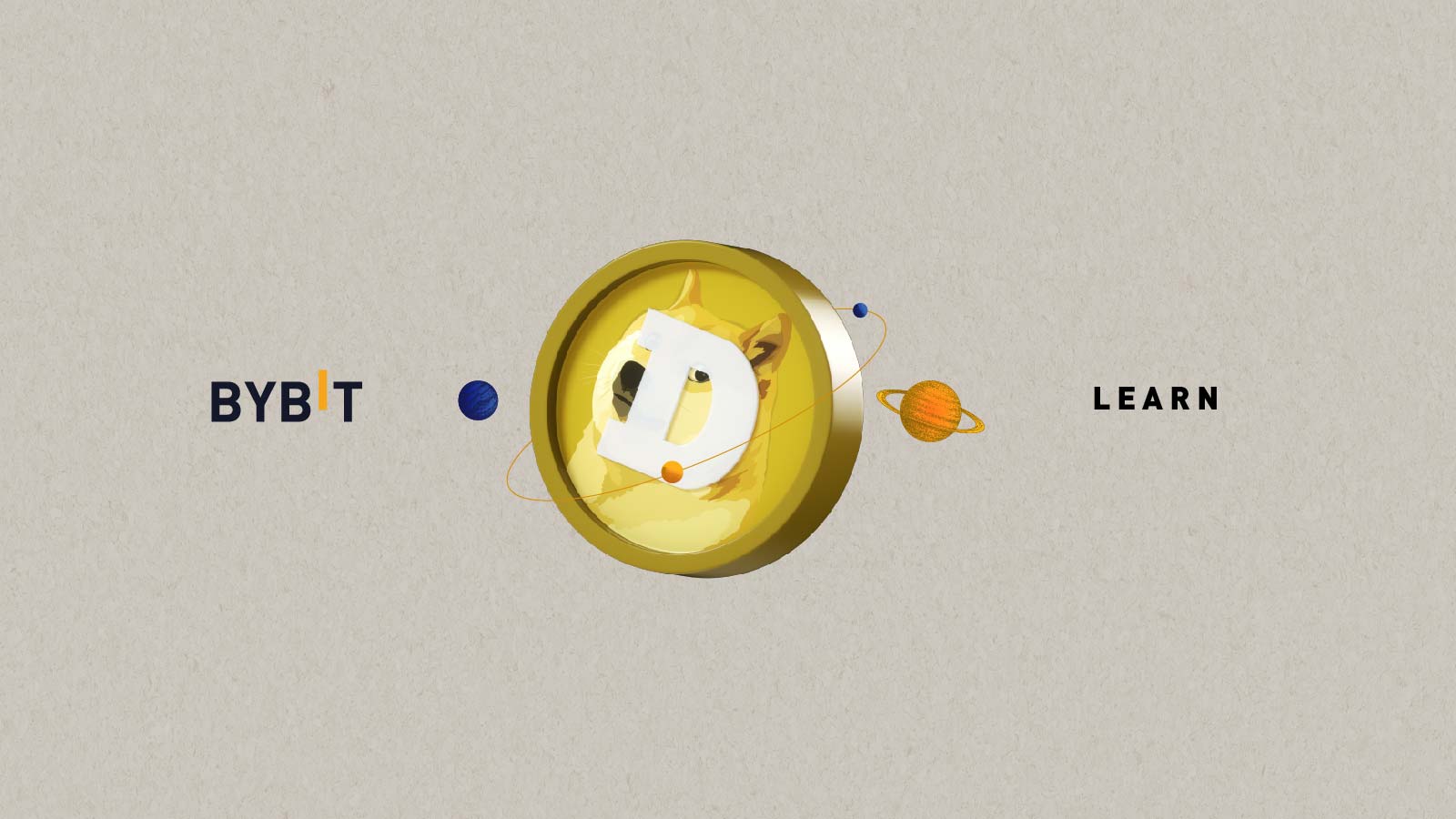 The hype around this coin has been huge, and as such, it has been catapulted into the top 10 cryptocurrencies by market cap. However, due to its uncertain nature, there are some aspects of Dogecoin that you need to consider before deciding to invest in it. You need to know a little about the coin itself, the people that run it, and its upcoming plans.

Dogecoin is a decentralized cryptocurrency with a very large community. The name “Doge” originates from internet memes of a Shiba Inu (breed) dog.

As a decentralized cryptocurrency, people can conduct peer-to-peer transactions with Dogecoins without the need for a central authority that governs the transactions.

As is the case with practically all cryptocurrencies, Dogecoins run on blockchain technology. These blockchains are also known as virtual ledgers, and they store the transaction history of the coins.

Unlike Bitcoin (BTC), Dogecoin does not have a limited supply. As of May 2021, around 129 billion DOGE are in circulation.

How Does Dogecoin Work?

How do altcoins such as Dogecoin work? What ensures their decentralization?

As mentioned, Dogecoin works on blockchain technology. A blockchain is collectively controlled by computer nodes that are owned by Dogecoin users. Since there is no central authority in a blockchain to regulate the transaction procedures, nodes are in charge. These nodes confirm DOGE transactions done by other people and then update the information in the virtual ledger called the blockchain.

However, to verify DOGE transactions, nodes need computational power as well as a vast amount of electricity. This is because they have to solve very complex mathematical problems that confirm the transaction.

As such, the DOGE network rewards these nodes with free DOGE coins to compensate  for their efforts in keeping track of every DOGE transaction. This process is called mining, and the nodes that verify transactions on the Dogecoin blockchain are Dogecoin miners.

After a DOGE transaction is verified, the information regarding the transaction is sent in the form of a block to the Dogecoin blockchain. Then, other nodes check the validity of the transaction so they confirm that everything is in order. This shared consensus mechanism is known as Proof-of-Work (PoW). It is also present in many other cryptocurrencies, the main one being Bitcoin (also the first to use PoW).

Let’s illustrate this whole process with an example. A guy wants to send you some funds through Dogecoins. Let’s say that he decides to send you 50 DOGE. Before being able to accept the Dogecoins that he wants to send, this transaction needs to be processed. Nodes in the Dogecoin network “compete” with each other to solve the complex mathematical problem first, in order to verify the transaction.

After a node or a mining pool (a group of miners that share the reward) verifies the transaction, other nodes have to check its validity. If more than 50% of the nodes agree that the transaction is valid, then you will finally receive the 50 DOGE. This entire process is done in a decentralized manner, meaning that no third parties oblige you to pay additional fees for completing the transaction. You then can sell or hold (HODL) those 50 DOGE entitled to your address.

DOGE transactions are verified on a new block approximately every minute or so. This makes Dogecoin one of the most time-efficient cryptocurrencies in the world when compared to other large-cap cryptocurrencies that may take hours to be processed (i.e., Bitcoin).

Cold Wallets: Dogecoin can be stored in offline hardware cold wallets such as Ledger, Trezor, or KeepKey.

Hot Wallets: Dogecoin can also be stored in online hot wallets such as the ones from Binance, Kraken, Dogecoin Core (software that makes your PC a node), or MultiDoge.

Nonetheless, crypto wallets do not ensure the safety of the whole blockchain. The Dogecoin blockchain or any other cryptocurrency blockchain can technically be hacked if one person controls more than 51% of all the nodes in the blockchain – in something called a 51% attack.

While it could theoretically happen, controlling 51% of the blockchain would be almost impossible, as it would require a miner or mining group to obtain enough hash power to take command of 51% or more of a blockchain network — an almost incomprehensible amount of hashing power.

There have been cases, however, when the Dogecoin community has experienced the dark side of crypto.

In 2014, an individual named Ryan Kennedy created a Dogecoin exchange named Moolah and used a fake name, Alex Green, to promote the exchange in the Dogecoin community. Moolah became a popular exchange, but he ran off with a large amount of Dogecoin in October of that year. committing fraud. He was charged with multiple cases of fraud by UK police in 2017.

So How Can You Buy Dogecoins?

Now let’s look a little bit at the history of this cryptocurrency, why it has become relevant, and where it stands today.

The term “doge” originates from an internet meme. It represents a Shiba Inu dog. Ever since Bitcoin was launched, every other cryptocurrency that’s followed has either tried to be as good as Bitcoin, or be better by trying to resolve the Bitcoin issues.

Billy Markus and Jackson Palmer thought that maybe it was time to create a cryptocurrency that is not quite as serious as other ones, but rather has a  “fun” approach on the market. So they decided to create their cryptocurrency based on an internet meme, that of a Shiba Inu dog. Dogecoin was created in 2013 and launched on December 6 of that year.

In the same way, others approached Dogecoin as more of a “fun” investment. For this reason it was still not considered a serious cryptocurrency. Nevertheless, since today’s generation is heavily influenced by the internet and the comedies that come with it, many people started joining the Dogecoin community and making serious investments.

In 2014, investors raised funds to support the Jamaican bobsled team at the Winter Olympics. The total accumulated funds were around $30,000. In the same year, $50,000 was raised to build water wells in Kenya. To raise Dogecoin’s popularity, DOGE investors raised money for sponsoring various events, or prominent figures such as NASCAR racers.

So even though this cryptocurrency may have started as a joke, its community grew very quickly.

What really increased Dogecoin’s growth, in terms of price and even more as a community, happened more recently:the involvement of one of the richest men in the world, the CEO of Tesla Motors, Elon Musk.

Musk has been establishing a trusted profile in the world of social media and beyond for many years now. Moreover, in recent times, he has become an important figure in crypto communities. Although exact figures are not known, Musk is considered by many as an institutional investor (large investor),also known as a “whale investor” in crypto lingo. Because of this, Musk has the ability to influence the market prices of cryptocurrencies by buying or selling very large amounts of coins at once, or even by just mentioning things on social media.

To illustrate, Musk typed “doge” on his Twitter account in December 2020. This increased the price of Doge in the following months because retail investors (small, individual investors) feared missing out on potential price appreciation — something known as FOMO.

He continued these types of tweets in the following weeks, pronouncing that “Dogecoin is the people’s crypto,” and even adding in his bio that he is the CEO of Dogecoin. 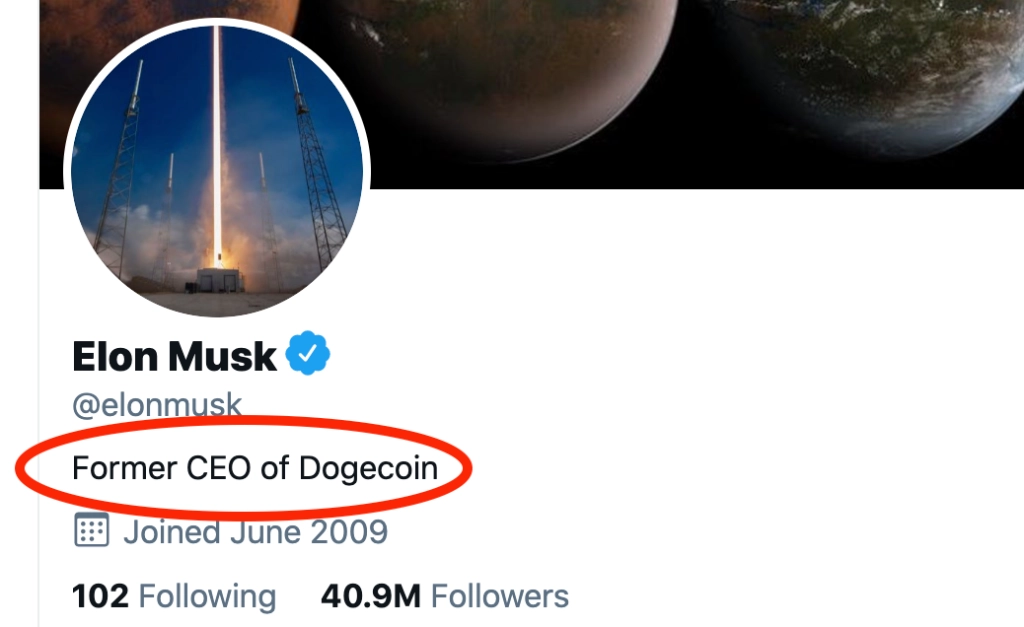 In the past few months since Musk began to mention Dogecoin in some way or form on his social media, its price has rocketed.

On May 13, 2021, Musk announced that his Tesla company is suspending vehicle purchases on Bitcoin, citing concerns over its environmental impact. 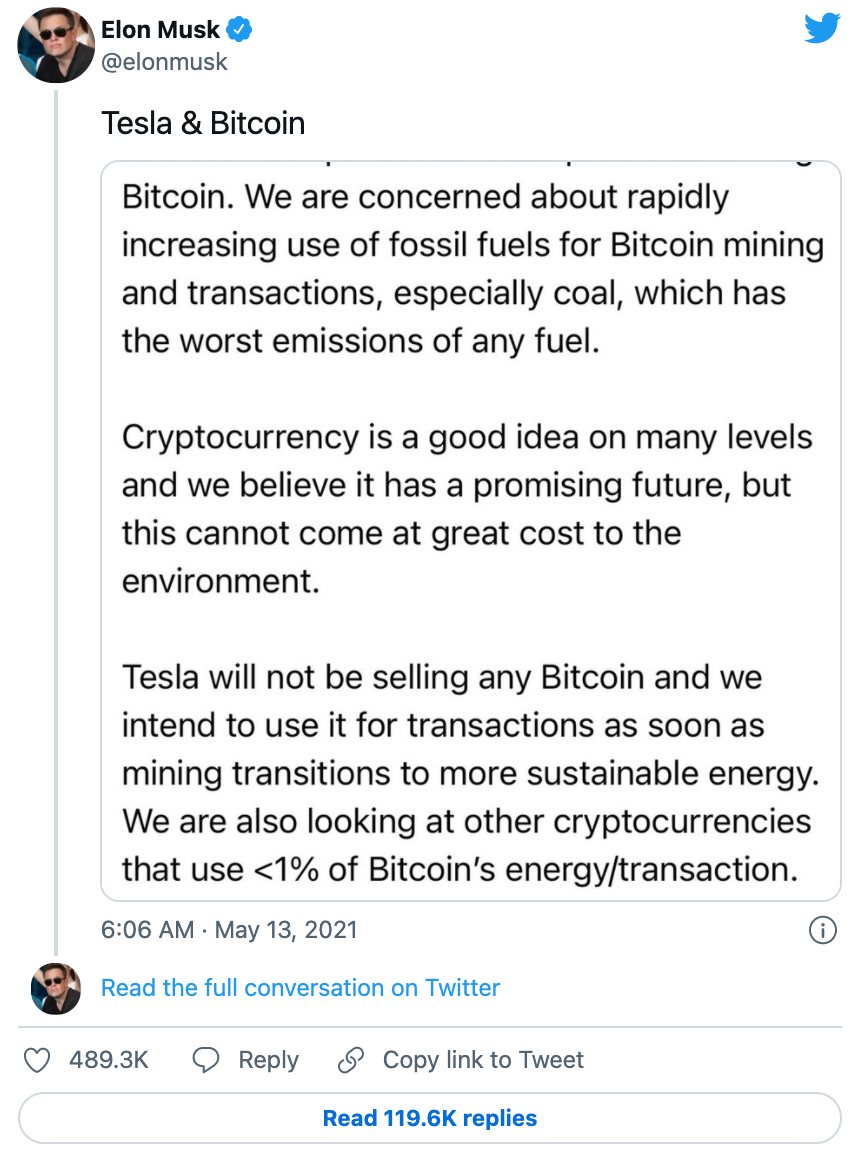 Intriguingly, just days earlier, Musk had ran a poll on his Twitter asking if Tesla should accept Dogecoin, with an overwhelming amount of respondents voting ‘yes.’

Could this be part of a move by Musk to push Dogecoin as a ‘green’ cryptocurrency in which Tesla will accept payments of? Only time will tell.

According to Coinmarketcap, the initial price of Dogecoin back on December 16, 2013, was $0.0002. The price increased to $0.001 by the beginning of 2014 and then decreased again to its initial price range.

Its price remained more or less constant for the next three years. By the end of 2017, Dogecoin started increasing again, along with the bull runs of many other cryptocurrencies. The price was $0.005 on the first day of 2021. It quickly reached a new high of $0.01 by January 8th, 2018. The price decreased again to around $0.002 and remained relatively similar until the end of 2020.

What Is The Future of Dogecoin?

What to expect for the future price of Dogecoin? Let’s take a look. 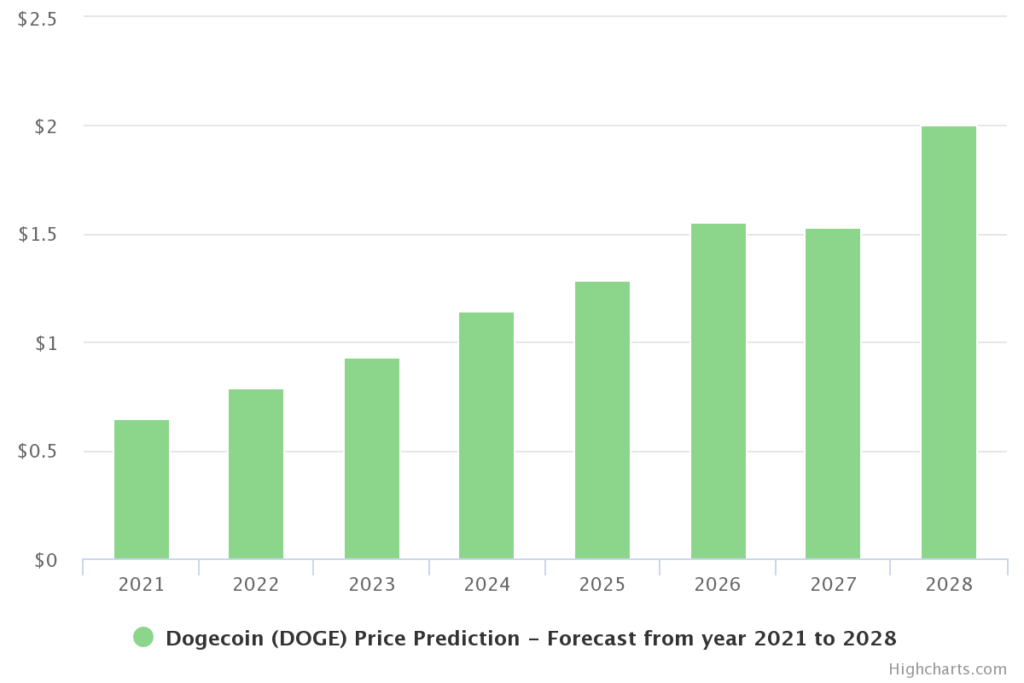 Walletinvestor also predicts an increase in the price of DOGE in the long run, but at a much slower rate. The price may only reach a high of $0.88 by 2025.

The same goes for TradingBeasts. They predict a relatively small increase, both in the short and the long run. They believe the the price could go as high as $0.64 by the end of 2024.

Other services such as Longforecast predict a much larger increase, predicting it could reach $2.55 by 2025. But to get a grasp of where Dogecoin may head, you need to understand what factors may determine its price.

What factors could affect its price in the future?

Is It Worth Investing In Dogecoin (DOGE)?

The low value of Dogecoin makes it an ideal asset for new investors to buy, experiment and familiarize themselves with the crypto world. Therefore, the use of Dogecoin for low value transactions or tipping creators on social media will hopefully continue to grow. However, the volatile nature of the currency and constant supply make it a weak contender as an investment asset.

Simply put, experts opine that Dogecoin is safe as a transactional currency but not as a speculative asset or a store of value. It might lack the cutting-edge technology of Bitcoin or Ethereum, but its utility is indisputable.

To conclude, Dogecoin has become one of the most popular cryptocurrencies in the crypto market. While it may seem to investors that  have “missed the boat” on making large gains, there is still the potential to grow. However, only time will reveal Dogecoin’s true potential.

While it might not be a “serious” cryptocurrency, investing in Dogecoin can indeed still be very profitable, as has proven the case for many investors in early 2021. But of course, as with investing in any asset (cryptocurrency or not), there are risks involved. As the old mantra goes: only invest what you can afford to lose.

So, with the new found knowledge in crypto, why not sign up to Bybit?