Cult DAO is all about revolution. More precisely, it’s about investing in revolution. The anon team driving the Cult network is serious about community and decentralization, and they want to see the collapse of the old financial system. If this sounds interesting to you, you’re in luck. Today, we’re going to jump right into this growing crypto movement by going over exactly what Cult DAO is, how it works, where it’s going, and how it’s fighting for freedom and a decentralized future through innovative solutions.

What Is Cult DAO?

Cult DAO is a decentralized autonomous organization focused on community and helping forward-thinkers fund, build and scale blockchain-based crypto projects that seek to revolt and continue the advancement of the decentralized revolution.

Aiming to accelerate the DeFi revolution, Cult DAO serves to empower people to “break away from societal, economic and other norms.” To do so, Cult provides its users with the support and tools necessary to launch DeFi-oriented projects. In fact, users can actively vote on whether or not to fund decentralized application projects to achieve this goal.

To help create and sustain a completely decentralized economy, the DAO’s blockchain protocol employs a tradable and liquid token known as CULT. The CULT token powers the Cult DAO organization and fuels its decentralized funding mechanism. Unlike certain deflationary coins on the market, the Cult developers claim the token is not a speculative currency or charity token.

The Origins of Cult DAO

Cult DAO began as a means to revolt and free you and everyone else from the chains that bind us. It began with the realization that we exist today simply as a cog in the system; as a means to no end other than to enrich the central banks by serving an economic function.

Knowing we all can’t live out in the woods, Cult DAO founder, Mr. O’Modulus, released The Cult Manifesto and launched the autonomous organization in early 2022. In The Cult Manifesto, he mentioned that by launching Cult DAO, the “world’s first completely decentralized token” was made available for “those contributing or building toward a decentralized future.”

The concept of Cult DAO was to become the first completely decentralized funding mechanism to sponsor those eager to contribute to breaking society’s ties. Putting this concept to work involves the transaction and exchange of CULT, the Cult DAO token, in order to continuously provide project funding, pay investors and continuously replenish the treasury.

Mr. O’Modulus discussed this concept in a recent blog post:

"Society is designed to make it as difficult as possible to break away from economic, societal, and social norms. So, what if supporting the $CULT ecosystem could be in itself a full-time or part-time job?"

This concept led to the development of an autonomous, self-governing ecosystem built around rewarding large-scale contributors, called “The Guardians,” and those who contribute at a smaller yet equally important level, known as “The Many.” Any CULT tokens earned can be used for staking or rewards.

The Objective of Cult DAO

According to Mr. O’Modulus, the Cult DAO protocol “exists to allow The Many to not have to rely on wage labor fully, or in part, and to fill the gap and pay users, to further the cause of decentralization and the CULT ecosystem.”

In other words, Cult DAO wants to help users achieve financial freedom by furthering the expansion of decentralization. It seeks to create a revolution by talking about Cult, staking CULT, and creating a decentralized financial ecosystem that permeates popular culture.

How Does Cult DAO Work?

Cult DAO takes decentralization seriously. As evidence, the private keys to the funds held within the DAO are not held by DAO members. Instead, the DAO operates independently and is entirely controlled by non-upgradable smart contracts.

These smart contracts send out 13 ETH investments to each Guardian who submitted a proposal and received a successful governance vote. To become eligible for funding, a proposal must fulfill the following three criteria:

• Advance the cause of decentralization

• Directly benefit a noble cause

Only The Guardians can submit proposals. If a proposal meets at least two of the three conditions, The Many, who comprise the rest of the DAO, can then place their votes on whether to approve the proposals and support investments.

A burning mechanism is also in place to act as an incentive. For every 15.5 ETH raised, 2.5 ETH of CULT is burned. The remaining 13 ETH goes to the cause or protocol of the investee.

The investee token is then redistributed according to the proposal, with full distribution transferred to the CULT token once a day, one a week or whatever the agreed-upon rates of disbursement may be.

Who Are The Guardians?

The Guardians are Cult DAO’s top 50 individuals who hold the most CULT tokens. As a result of their history staking Cult, they’re given the honorable task of creating, safeguarding and sending proposals to The Many. Since they have larger token shares and pull considerably more weight than other token holders, they can voice their opinions of any sent proposals, but can’t use their wealth to influence others.

From a business perspective, Cult DAO is a venture capital fund, except that it’s decentralized and based entirely on blockchain. Other than that, it works much like a VC fund: Proposals are voted on by the community; community members participate as crowdfunding investors; and the community receives the investment returns as dividends in the form of Cult DAO tokens.

All that said, Cult DAO is no ordinary crypto, DApp or VC fund. It features a blatantly provocative manifesto; a decentralized governance model for proposals and voting; unchangeable smart contracts; and zero private key access. It also features the CULT token, RVLT token, a burning mechanism and more, to take decentralization to the extreme.

Cult DAO is an autonomous self-governing ecosystem designed to reward large-scale contributors — The Guardians — and those who contribute on a smaller yet equally important level.

dCULT is the proof of staking token for CULT. When staking your CULT into the DAO, you’re granted dCULT, which you can then exchange for the CULT you originally staked. However, as a “thank you” and an incentive for holding dCULT, you’re eligible to receive a portion of the token paid into the DAO.

That’s right. You can only earn dCULT by staking CULT. In fact, staking CULT is the foundation of the whole protocol. Users receive dCULT tokens as a form of security deposit for staking CULT. Redemptions against the original staked amount can be made at any time.

Voting rights or staking rewards are granted only to those who have staked tokens. However, staking doesn’t require the depositing of funds. Each transaction helps advance the project, while each token burn helps reduce and manage the number of coins in circulation.

The token distribution and burn plan facilitates the vesting schedule for the protocol’s token. When The Many accept a project proposal, 13 ETH go to the proposal wallet address and 2.5 ETH are sent to a burning wallet.

On a larger, more general scale, 10,000 tokens are burned for every 60,000 raised. This is combined with a 50/50 redistribution model, in which half of the tokens are redistributed back into circulation and the other half are burned.

As you already know, only The Guardians can submit proposals for a vote. However, proposals can come from anyone, including other community members, venture capitalists, politicians, anarchists and so on, as long as they conform to Cult DAO’s three criteria: All proposals must fight against centralization, advance the cause of decentralization and benefit a noble cause.

In addition, a proposal submitted for voting must also include:

• A distribution and burn plan

The concept of revolting against the establishment by furthering decentralization led to the development of an autonomous, self-governing ecosystem built around rewarding those who further the cause. To do so, Revolt 2 Earn (RVLT) was born.

RVLT is the first token of the Cult DAO ecosystem. It was built as a POS (proof of stake) token on the Polygon blockchain. While the CULT token funds the accelerating decentralization of the DAO’s protocols, RVLT supports individual Cult DAO users working toward the same goal. This serves the DAO’s belief that individuals, or a small group of like-minded people, can shape their shared vision of the future. 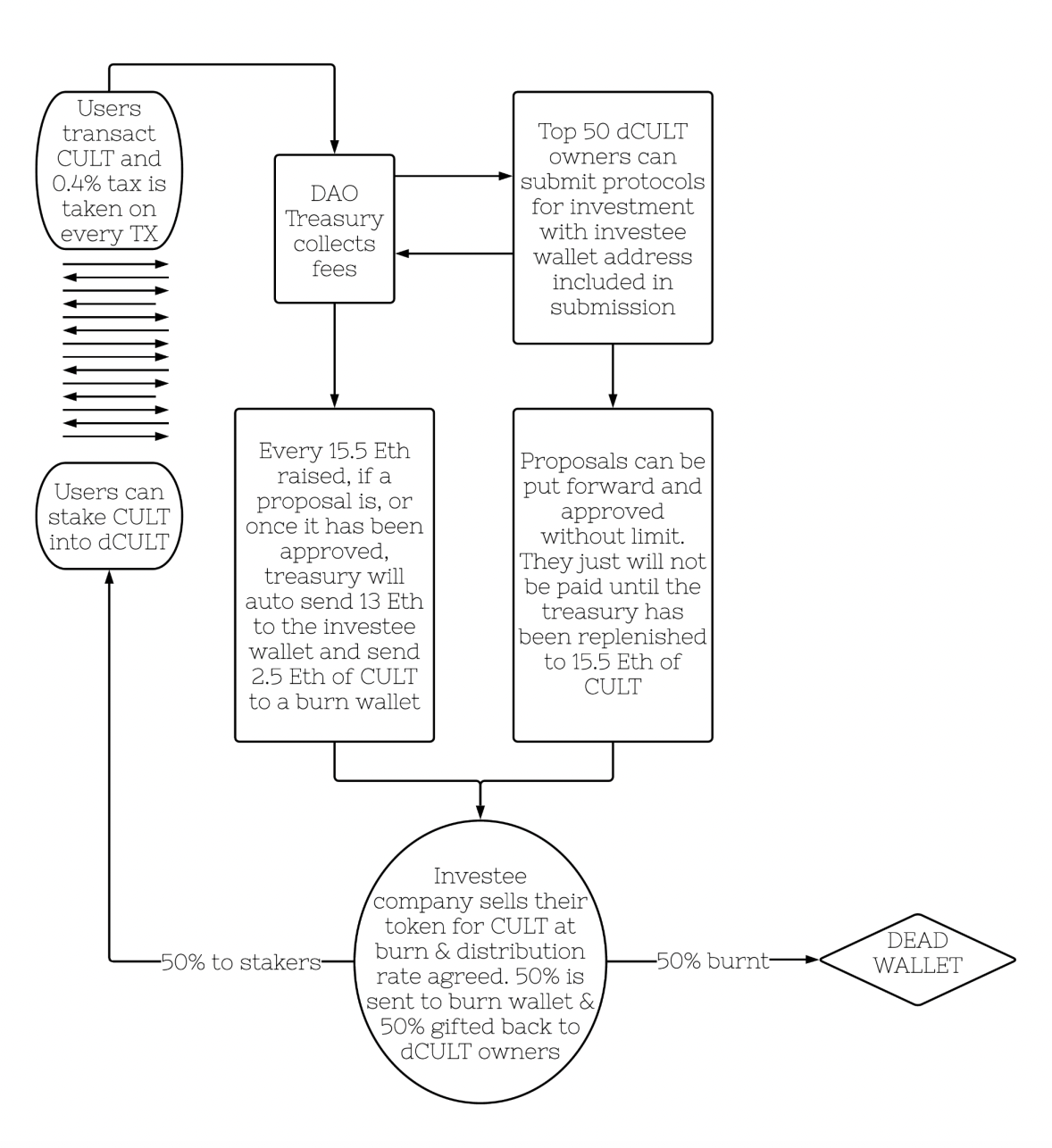 CULT has a maximum supply of 6,667 billion tokens and a market cap of 54.8 million tokens.

With CULT transactions, 0.4 percent of each transaction’s CULT value is sent to the DAO treasury. The treasury places the CULT into a smart contract, which removes the CULT from circulation and releases it back into circulation according to a predetermined maximum level.

As mentioned previously, Cult DAO also destroys 2.5 ETH for every 13 ETH sent to the protocols and employs a 50/50 redistribution model that burns half of the tokens and sends the remaining half to dCULT token holders.

An interesting note about CULT is that when it declines in value against Ethereum, the quantity of CULT to be burned increases. So too does the steady volume of CULT taken out of circulation and placed in the treasury. In other words, the longer CULT remains bearish, the faster it is burned and pulled from circulation.

This means that every time CULT is in the red versus Ethereum, the amount of time needed for it to climb back into the green is reduced. Every sell and potential price drop simply transfers the value from short-term CULT holders to investors with the patience to hold on through the inevitable dips and swells. To put it plainly, the tokenomics of CULT are designed to weather and even profit from the coldest conditions any crypto winter can dish out.

Price forecasts for cryptocurrencies are often wrong due to their volatility. However, according to several reputable websites specializing in crypto price predictions, the short- and long-term outlook for CULT remains steady and strong across the board.

Meanwhile, DigitalCoinPrice.com predicts the token will hit $0.0000204 by the end of this year and $0.0000231 the following year. What’s interesting is that they forecast the price to dip and gain while hovering around this price until 2026, after which they expect the token to climb year after year until it reaches $0.0000827 in 2031.

Of course, any price predictions should be taken with a grain of salt. While the general trajectory of CULT seems to be pointing upward, you should study the market and only hold long-term if you have a healthy risk appetite and nerves of steel to weather short-term spikes and dips.

Where to Buy CULT

You can buy CULT from Bybit, or any popular crypto exchange with a large user base and decent daily trading volumes.

If you live outside the U.S., you can purchase CULT on Bybit in four easy steps:

When working with a major exchange, such as Bybit, that has access to altcoins like CULT, that’s really all there is to it. There are fewer hoops to jump through, allowing you to invest in decentralization — and freedom — in no time at all.

Is CULT a Good Investment?

Whether you invest in Cult DAO depends on your view of DeFi and personal risk appetite. Based on past price history, CULT may drop three percent one day and gain nearly 100 percent in one month. CULT is viewed from a long-term investment point of view, in which short-term losses and gains can be experienced, much like Bitcoin, Ether and other cryptos.

Cult DAO is seeking to fast-forward the upheaval of the global financial system. To do so, they fund revolutionaries looking to do the same. With strict governance and use of CULT, dCULT and RVLT tokens, Cult DAO continues to grow into a strong decentralized community in search of the one thing we all cherish: Freedom.