Axie Infinity (AXS): A Crypto That Rewards You For Gaming

Axie Infinity is a blockchain game that is partially operated and owned by the players. As the players earn AXS tokens, they can decide the future of the game. The game’s core has been drawn from Pokémon, except that Axies — the monsters which players create in the game — are NFTs bred by collecting Smooth Love Potion and AXS tokens. Since Axie is a creation of real-world effort and time, it has a specific value, allowing players to trade in-game “monsters” for money.

In this guide, you’ll learn everything about Axie Infinity, including its native token AXS functions and how digital pets work. Ultimately, you’ll get a good grasp on how you can play to earn crypto.

What Is Axie Infinity?

Axie Infinity is a play-to-earn blockchain-based game where players can collect, battle, build or raise land-based kingdoms for the pets they’ve created.

According to AXS’s white paper, the game lets players interact with each other in the Axie Infinity ecosystem, where they win AXS tokens as rewards for their performance in the gaming universe. This crypto play-to-earn game was created by a company called Sky Mavis.

Third parties can access Axie’s genetic data and art assets, letting community developers build their personal experiences into the game’s universe. Currently, Axie Infinity is the #1 Ethereum game with respect to monthly, weekly and daily active users. It has generated over $16 million in revenue or an equivalent of 13,000 ETH.

Players can earn AXS tokens in the following ways: 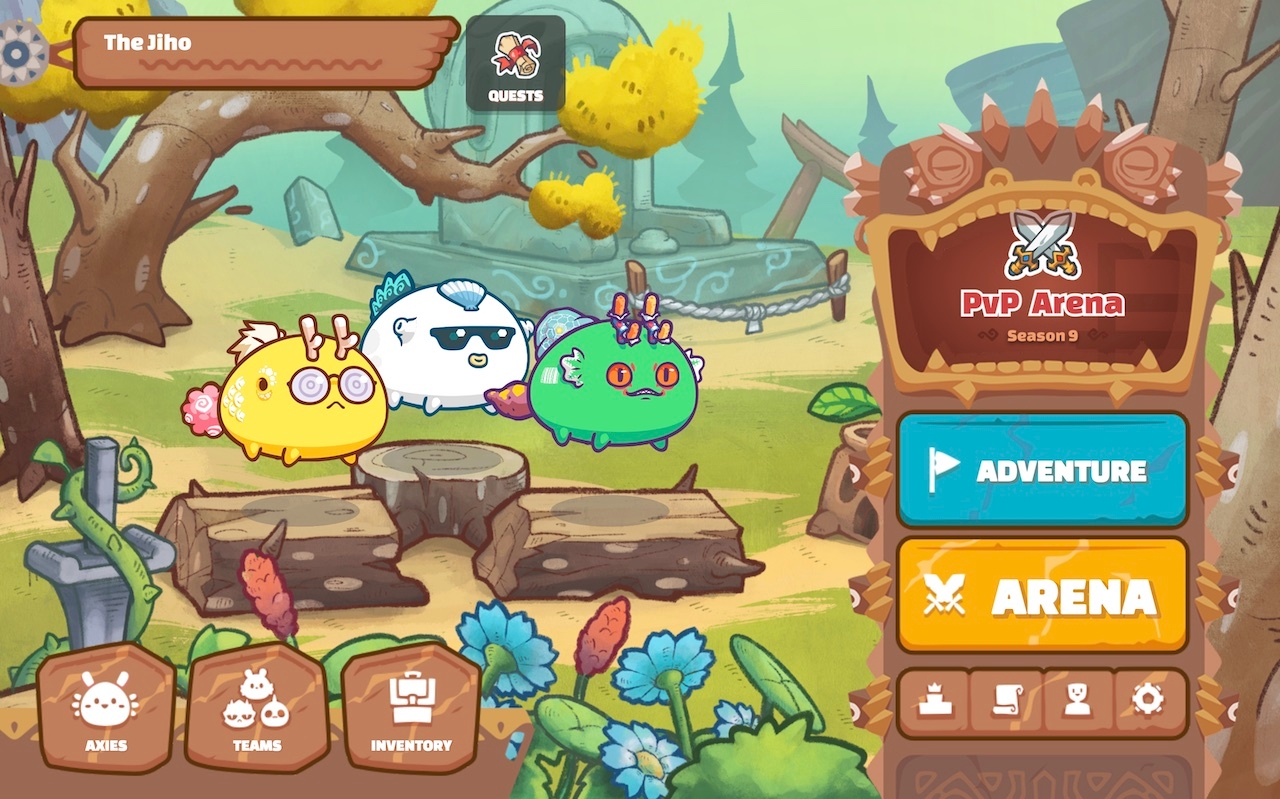 Before learning how NFT games work, you need to know what NFTs are. NFTs, or non-fungible tokens, are unique digital assets representing real-world items such as videos, music and art.

Typically, NFTs are bought and sold online and have similar underlying software as cryptocurrencies. While most people are only becoming aware of them now, NFTs first entered the limelight in 2014.

Today, they’ve become a popular means of investing and selling digital work. Through 2017, $174 million had been spent on non-fungible tokens worldwide.

So, what does the term “fungible” mean? Basically that the item is unique, and you cannot replace it with something else.

For instance, cryptocurrency is fungible. If you have a Dogecoin, you can exchange it with another Dogecoin, and the two will be exactly the same. However, a non-fungible item is one-of-a-kind, which creates digital scarcity — thus accounting for the high price of an NFT.

Think of an NFT as a collector’s item, but digital. For example, a personal autograph from Audrey Hepburn or the original diary of Anne Frank is a collector’s item. These objects cannot be replaced, nor can there be any more items exactly like them. NFTs are just like that but in a digital format.

Example of an NFT

When Jack Dorsey founded Twitter, he wrote his first tweet, “just setting up my Twitter,” in 2016. There have been millions (if not billions) of tweets since then, but there will only always be a single “first-ever” tweet.

That’s why it was sold as an NFT for a whopping $2.9 million to the CEO of Bridge Oracle, Sina Estavi.

Every Axie — the in-game digital pets in the Axie Infinity game — are NFTs with unique characteristics and build. Since no two Axies are the same, they are non-fungible.

According to Axie Infinity’s website, players can build Axie teams and conquer enemies. Depending on their genetic makeup, each Axie has unique strengths and weaknesses.

Since there are billions of different genetic combinations, no two Axie NFTs will be the same.

Players have to buy three Axies to start playing. The cheapest Axie NFT is around $200, while the most expensive Axie sold for 300 ETH in late 2020.

Players earn AXS coins through their contribution and performance in the game. Once you’ve bred an Axie, it’s an NFT that can be sold in the marketplace. The play-to-earn model has given Axie Infinity immense popularity in developing countries.

AXS holders can stake their tokens, participate in governance votes and play the game. The developers claim that Axie Infinity Shards will help accomplish the following goals:

Axie Infinity Shard doesn’t differ from Axie Infinity, since the incentive is a part of the game and offers a way other than NFT creation for the players to earn rewards. Players can make AXS through “user-generated content initiatives” and by playing games in Axie Infinity.

SLP or Smooth Love Potion are tokens that Axie Infinity players can earn in adventure and battle modes. You can earn SLP by completing daily quests, like winning ten times in single-player adventure mode or opening the game once daily.

These tokens can be further used to breed Axies. Players can breed their first Axie for 100 SLP, and the cost increases after that. The second Axie is bred for 200, the third for 300, the fourth 500, the fifth 800 and the sixth for 1,300. At maximum, players can breed up to seven times, with the seventh breed costing 2,100 SLP.

SLP facilitates the game’s play-to-earn model since players have to win SLPs and then use them to build Axies. Players can sell their farmed SLPs at the current market price.

Play-to-Earn AXS and SLP: How to Start

To play the Axie Infinity game, you need to buy three Axies from the marketplace using Ether. Here’s how to do it:

We’ve already discussed SLP above. Now, let’s explain Axies a bit. These are the players’ virtual pets, who have different attributes. Axies have nine classes:

Each class has unique attributes that determine its role in the Axie team you create. And each Axie has four primary attributes:

Each class has a highlighting attribute. For example, “Plants” are good at defense, while the “Beasts” are perfect for their attacking capabilities.

Axies have six body parts; tail, back, horns, mouth, ears and eyes. More importantly, each Axie has four abilities/moves, called cards. The game has 132 cards in total to choose from.

An Axie’s ability can be attacking the opponent or being on the defensive. Some might even steal energy from your opponents. As a rule of thumb, an impressive Axie has balanced abilities to perform its role perfectly.

Players combat their competitors in battle, earning SLP when they win. They then use this SLP to breed more Axies and build their team.

Axie Infinity is quite different from other games. It uses a Blockchain economic design to reward players for their performance. In this way, it is a play-to-earn game that has garnered attention from thousands of players worldwide.

The developers assert that their game presented people with a unique income stream during the pandemic. Many Axie Infinity players are the older generations who were unfamiliar with Blockchain technology before they started playing the game.

While other Blockchain games — such as Evolution Land and Gods Unchained — have a niche-specific market, Axie Infinity has attracted people of different age groups from all over the globe.

A mother of three in the Philippines who started playing Axie Infinity during the pandemic says, “What matters is having money so we can eat, avoid debts and get through every day. It [Axie Infinity] sustained our daily needs, paid our bills and debts. I was thankful to Axie because somehow it helped us.”

Interestingly, it has become fundamental in people’s lives in the global south, having replaced regular jobs for some players. In fact, players in the Philippines may have to start paying taxes on their Axie trades, according to the Philippines’ finance undersecretary. No other Blockchain game has reached this level of significance in players’ lives.

Axie infinity may be comparable in popularity to Pokémon Go, from which it took its inspiration. Still, it has given economic importance to gaming that other games have yet to achieve.

Why Is AXS So Expensive?

Quite simply, AXS is expensive due to its rising popularity. At the beginning of 2021, the game’s revenue was $1.92 million, which skyrocketed to $120 billion by July.

Also, AXS price rises with an increase in SLP price since the potion is required to breed Axies. The SLP price has significantly increased in the past few months, leading to the production of fewer Axies. The price has risen since the launch of sidechain Ronin, especially in countries like the Philippines, Cuba, United Arab Emirates, Venezuela and Qatar.

At the grassroots level, this is a straightforward supply-and-demand mechanism. The supply of Axies is less than the demand, which increases the price of AXS.

How to Stake AXS Token

AXS staking rewards are an incentive offered by the developers to players for holding AXS. Players who stake their AXS coins for a certain period, such as 6 or 12 months, can claim weekly rewards.

AXS staking is not currently active, but the developers are expected to announce it soon.

What Does the Future Hold for Axie Infinity?

With Axie Infinity’s popularity increasing, the future seems to be bright for AXS. According to Gov Capital, “Axie Infinity price has a promising future. It may get marginally impacted, but bulls will be back, and around 2025, the predicted price of Axie Infinity may skyrocket to $110, making it a good investment, and the trend continues.”

While most people consider AXS a good investment for the future, some experts suspect that the “herd mentality” currently driving the valuation to extremes may not last for too long, bringing a volatile price swing.

According to Denis Vinokourov, head of research at a quantitative finance management firm, “The euphoric-herd mentality pushed the valuation to extremes and, as with any overcrowded trade, once the unwind takes place, the price swings will be extremely volatile.”

With experts on both sides of the spectrum, its future depends on the support of the Axie Infinity community and the popularity among players and the success of AXS staking once it’s launched.

To sum up, Axie Infinity AXS is all the rage these days, but it’s up to its players to decide if the AXS cryptocurrency is worth the risk. Technical analysis of AXS forecasts a positive outlook for the currency. As the gaming industry evolves day-by-day, and only the future can tell if the hype for AXS will sustain. Still, the decision to invest should come from your portfolio analysis and personal risk tolerance at the end of the day.