Aragon (ANT): Why You Should Care

Most crypto exchanges today follow a set of codes and are run autonomously. These kinds of organizations are known as decentralized autonomous organizations, or DAOs. Unlike centralized institutions, DAOs allow their projects’ communities to handle decisions related to updates and improvements.

DAOs are rapidly gaining popularity among the crypto community. It may soon be that companies will no longer be spearheaded by a small team of people, but will instead collectively belong to all of their employees. One caveat is that the process of creating a DAO for business use can be very tedious. To make a fully-functional DAO, strong financial backing and a robust technical team are required — and, as these two prerequisites are hard to fulfill, the adoption rate of DAOs is limited.

The project we discuss in this article — Aragon — tackles this issue by simplifying the creation of DAOs for enterprises of any size and scale. We’ll also look at Aragon’s native token, ANT, and the reasons behind its surge of more than 200% since December 2021.

The Aragon network was founded by Luis Iván Cuende and Jorge Izquierdo in 2016. It’s a new-generation software that allows enterprises to create and manage DAOs on the Ethereum blockchain. Users of the Aragon protocol can create fully functional autonomous organizations. The DAOs created on Aragon offer plug-and-play solutions as all of its business functionalities, such as payment protocols and governance systems, are deployed during the creation process.

DAOs on the Aragon protocol are extremely scalable and customizable. As of this writing, close to 1,800 DAOs have been built on Aragon, and their services are currently being used by giants in the crypto space, such as Curve Finance and Decentraland.

Aragon Client is a tool for enterprises to create and manage their DAOs, whereas Aragon Network is a wider DAO that enables interactions between the platform’s network of DAOs. The Aragon Association is a nonprofit organization which manages and distributes the funds raised from Aragon’s token sale. The most innovative aspect of this protocol is Aragon Court, a dispute resolution service that settles any critical disputes among DAOs hosted by the Aragon Network which can’t be solved by smart contracts.

As mentioned, ANT is the native utility token of the Aragon network. It’s an ERC20 token built on the Ethereum platform. As part of a protocol which offers DAO development services, ANT is critical to the Aragon Network’s function. The token was launched in the last quarter of 2018 and had an impressive historic price action, especially in the last two years. About a year ago, the price of the ANT token was $3.23; since then, it’s increased by 313%, and as of this writing stands at $6.36.

What Is ANT Used For?

The primary use case of the ANT token is in the dispute resolution process undertaken by the Aragon Court. The process of dispute resolution is as follows: A group of users (aka, jurors) assess the background of the dispute and make informed decisions by analyzing all of the facts presented by both parties. For contributing their time and energy to solve complex disputes, these jurors are incentivized in the form of ANT tokens.

Thus, jurors solve disputes and earn rewards. To become a juror, you first need to exchange your ANT tokens for ANJ tokens. Then, you stake your ANJ tokens on the Aragon platform to become a juror and earn more rewards in the form of ANT.

ANT token holders also get to participate in the community governance of the Aragon Network. As a holder, you have the right to vote on many critical decisions, upgrades and proposals relating to the network.

How Does Aragon Work?

Developers get to create, build and manage their own DAOs on the Aragon Network. ANT is cleverly integrated into this process. Since the Aragon protocol is built on the Ethereum network, developers can deploy any Ethereum DApp integrations, which can in turn benefit other network participants. Creators of these DApps can earn income, depending on their application usage.

The Aragon protocol uses advanced smart contracts which can auto-fulfill and enforce transactions automatically. They use an escrow system to make payments autonomously once the conditions in the agreement are met. Aragon’s protocol also uses oracles to translate real-world contracts into data that can be fed to the blockchain.

As a platform that enables the creation of DAOs, it’s important to note that the Aragon Network itself is a DAO. Users of the platform participate in its governance, and a simple consensus settles any difference of opinions. As we’ve discussed, jurors solve network disputes which are beyond smart contract control. As with a legal court of law, both affected parties have the right to appeal. Any party dissatisfied by the jurors’ decision can escalate the case to a higher court on Aragon.

Unlike with most platforms, smart contracts on the Aragon Network are easy to read and comprehend, making it easy for users with no experience in development or technical knowledge to start trading.

Ever hear of impermanent loss? The collateral you’ve deposited could depreciate, and end up worth a lot less than your initial deposits. This occurs due to the highly volatile nature of crypto tokens. The Aragon protocol mitigates this issue by buying back tokens to maintain price stability, and selling them to limit price rise.

Users of the Aragon network don’t have to submit any personal information to access its services. For instance, as a user, you can maintain a completely different blockchain identity when making agreements.

Note: Figures below are accurate as of this writing, and are estimated up to two decimal places.

Pros and Cons of Aragon (ANT)

The Aragon protocol is backed by many notable names in the crypto and blockchain space, such as BadgerDAO, Decentraland, PieDAO and BrightID, to name a few. According to IsThisCoinAScam.com, the Aragon project is trustworthy. The platform gave the Aragon Network and the ANT token a score of 6.89, which is high for a new-gen protocol. 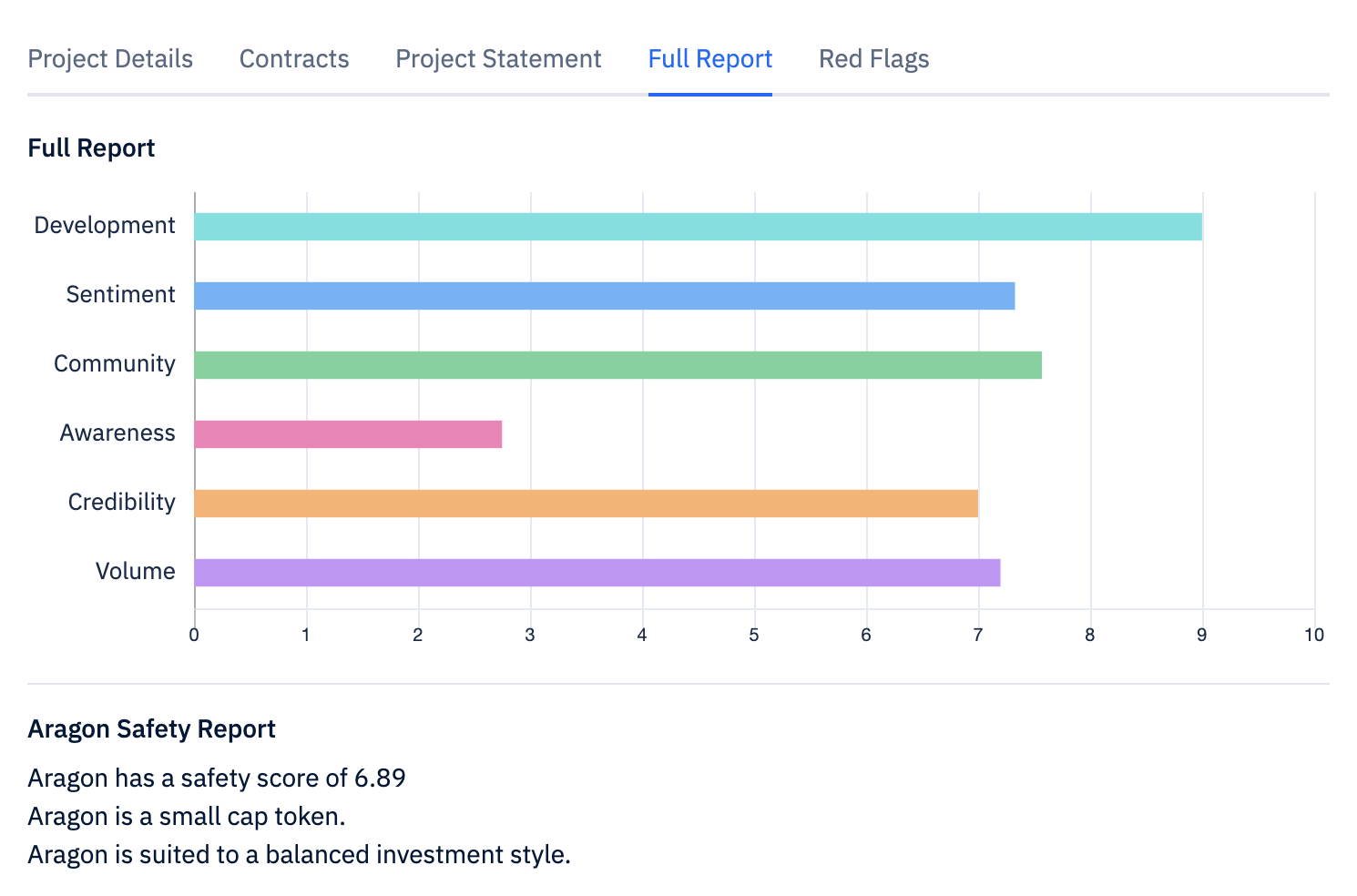 As you can see in the above screenshot, all aspects of the project except Awareness are rated a seven or above, suggesting that the team might need to accelerate its marketing efforts to reach more people.

The upside is that no red flags related to the Aragon project have been identified so far.

Is Aragon (ANT) a Good Investment?

Given their rich backgrounds in the tech industry, the founding team at Aragon definitely know what they’re doing. By allowing enterprises to create and manage their own DAOs, platforms like Aragon are accelerating the process of decentralization at an enterprise level. According to WalletInvestor, the ANT token could reach $30 in the next five years.

On Bybit, the trading of ANT derivatives is made simple by pairing them with USDT as a USDT perpetual contract. Essentially, this means that you’re using the USDT stablecoin as collateral to trade the ANT derivative, with all settlements conducted solely in USDT.

Follow the steps below to trade the ANT/USDT pair on the Bybit exchange.

You must have a registered Bybit account to trade any asset class on the exchange. If you don’t have an account yet, complete the quick sign-up process by visiting the official Bybit exchange website. After you enter the personal information requested, create a strong password and complete a simple verification process to transact fiat money on the exchange.

Visit the Derivatives section on the exchange and search for the ANT/USDT asset class. Make sure to have USDT in your Bybit derivatives wallet, as all the settlements for the trade are made in that token. You can do this in three different ways — Deposit, Exchange or Buy. That is, you can transfer your existing USDT over from an external wallet or exchange, exchange other crypto in your Bybit wallet for USDT, or buy USDT directly using the Bybit Fiat Gateway.

All you need to do now is to place the order. You can go long or short, based on market conditions and your own judgment. Make sure to place accurate take profit and stop-loss orders to mitigate the risk of liquidation. The crypto market is volatile, and it’s essential to follow strict money management rules, especially while margin trading.

Once the order is placed, you can see its details in the Order History section at the bottom of the trading terminal. The trade will be closed once the asset class price reaches either the take profit or stop-loss level indicated. If you wish to exit the Buy trade manually, click Sell (or vice versa, if you want to exit the Sell trade manually).

Protocols like Aragon are crucial to accelerating blockchain adoption at the enterprise level. By simplifying the DAO setup process for organizations, Aragon helps to lower the entry requirement to true decentralization. Furthermore, since the protocol is built on the Ethereum network, the security of client DAOs is unlikely to be compromised at any point. Overall, the Aragon network started off on a strong foot, although it remains to be seen how — and if — it will measure up to other blockchains that perform similar functions.