Web3 is a global movement that has taken the tech space by storm. Following the explosion of proof of stake (PoS) blockchains into the crypto space, there’s been an influx of developers leveraging smart contracts to build decentralized applications (DApps) for the digital economy.

As the PoS blockchain projects start expanding exponentially, their reliance on nodes simultaneously grows, emphasizing the need for a more effective node infrastructure. Node deployment is expensive and time-consuming, while establishing a staking node is also a complicated and costly process that heightens the barriers to entry.

The solution lies with Ankr. Its innovative developer and staking node architecture provide the security and incentives necessary for seamless web3 development. Fueled by its core utility token, ANKR, the network has the vision to provide PoS projects with multi-chain tools to build fast, inexpensively and reliably.

Let’s explore the Ankr ecosystem and find out why it’s a crucial player in the advancement of the web3 movement.

What Is Ankr Network?

Founded in 2017 by Chandler Song, Stanley Wu and Ryan Fang, the Ankr network started as a tech company looking to harness idle computing power from data centers around the world.

However, the Ankr platform quickly shifted its focus to providing a decentralized web3 infrastructure as a crypto solution to developers. Ankr has become a critical link to access leading blockchains such as Polygon, Arbitrum, Avalanche, Near and many others.

The Ankr team is on track to fully decentralize its governance and infrastructure for easy and prolific web3 building. Its thriving ecosystem aims to provide ANKR, its native token, with valid use cases as projects embrace blockchain technology through web3 applications.

Let’s look under Ankr’s hood to learn more about how it operates.

Everything on the web3 economy runs on nodes — from DeFi and NFTs to the metaverse and GameFi. Ankr operates a distributed node service so that developers can easily connect to public endpoints for free.

Its incentivized node economy comprises its own nodes and a steady, self-sustaining supply of independent node providers looking to address the high demand of requests by developers and stakers. 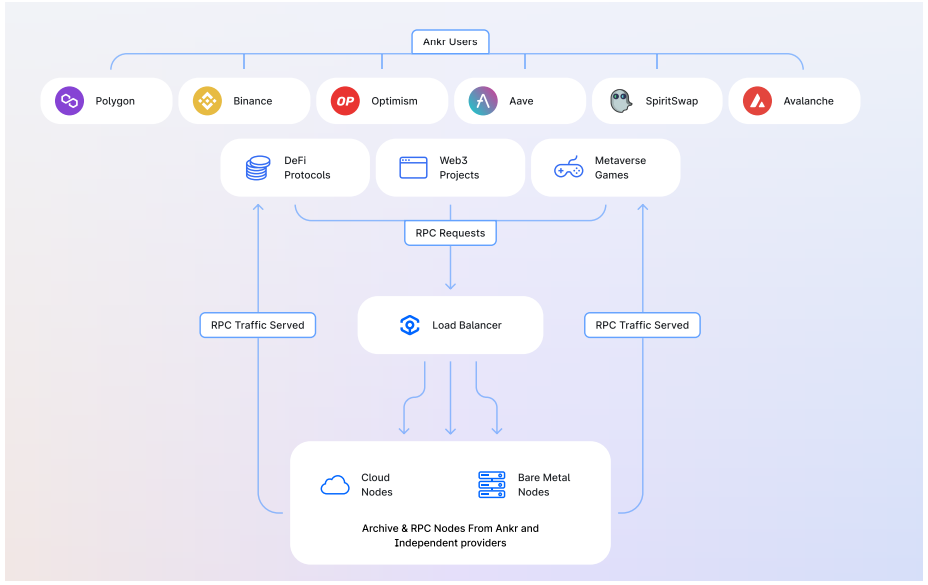 At the heart of Ankr’s node architecture is the load balancer. Once an RPC request is received on Ankr, it’s first sent to the load balancer (which acts as a router) rather than being assigned to random nodes. The load balancer then uses a scoring algorithm that determines the best node to cater to the request.

To ensure node health, the load balancer uses a scoring system to gauge whether nodes are synced to blockchains or behind on blocks. Also, the balancer connects the user to the quickest node, depending on geographical location. 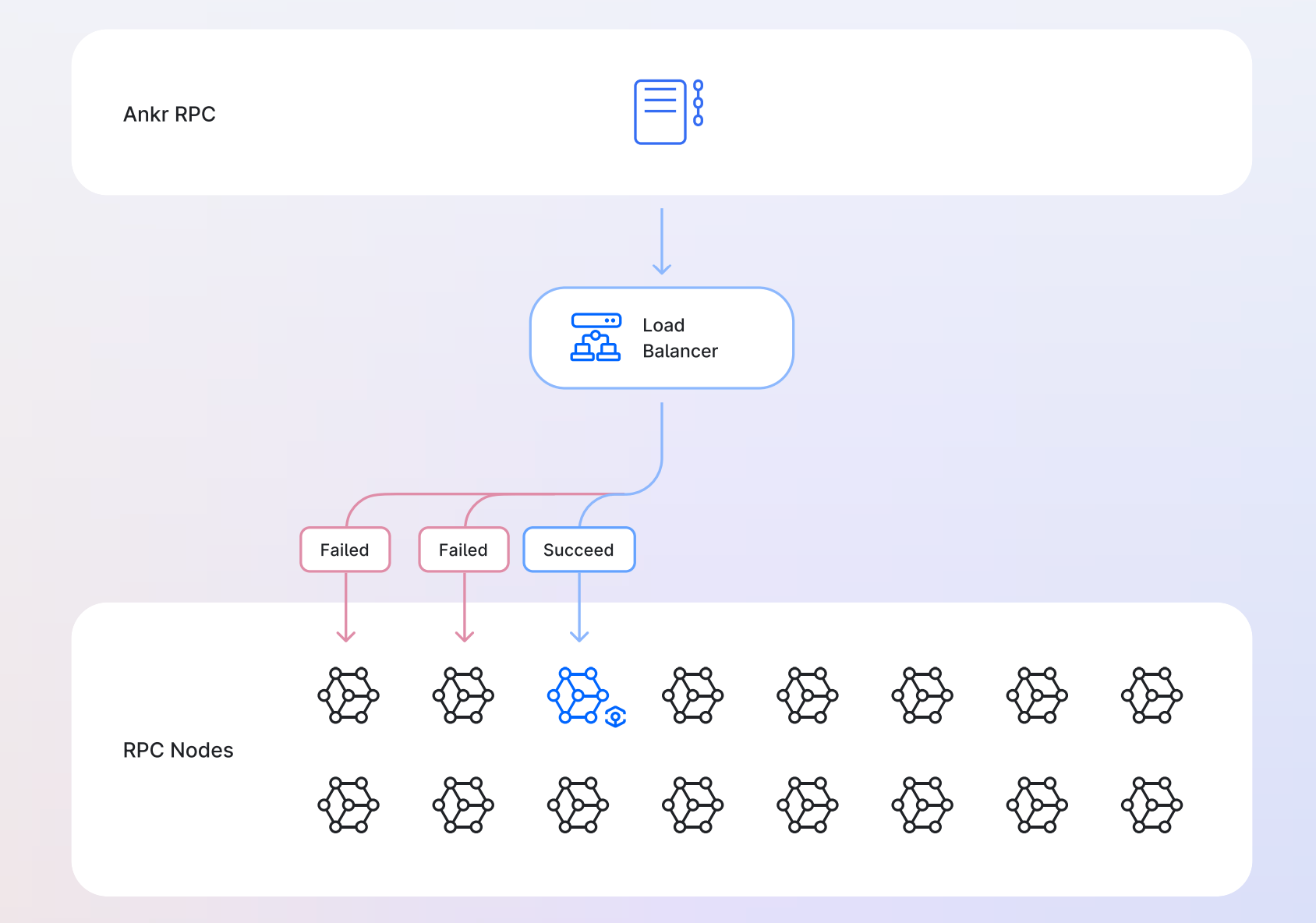 Ankr operates an advanced developer API service. The network’s application programming interfaces (APIs) help simplify the process of querying data from various blockchains. These time-saving APIs reduce the number of requests that a developer needs to make by querying multiple chains at once.

This API helps search Ankr’s database for a range of blocks, rather than manually searching for addresses and events using RPCs. Once a blockchain mints a new block, it’s added to a database to provide instant results to queries. The query API is SDK-enabled and indexed for better efficiency.

NFTs are an integral part of web3. As such, developers require tools that help them to work with NFTs. The Ankr NFT API allows developers to quickly search for information on NFTs across six blockchains connected to the API. Developers can obtain details such as an NFT’s owner, when it was minted, its transaction history and much more. 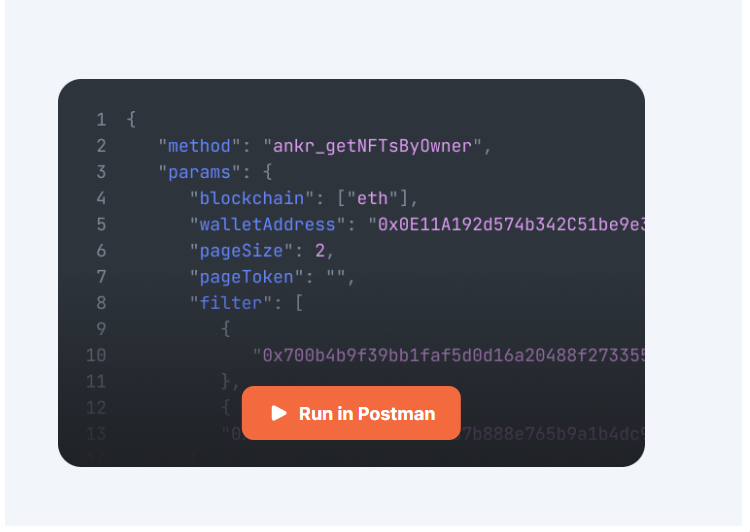 Using the token API, developers can efficiently search for details about tokens on the EVM-compatible blockchains supported by Ankr. They can obtain details such as token account balances, current market value and the existing number of tokens on a particular blockchain.

The Ankr liquid staking service provides integrators and stakers a flexible way to stake and earn from blockchains. Typically, staking involves locking up your tokens for some time, during which they can’t be used. With liquid staking, crypto holders can stake their assets on Ankr and receive liquid staking tokens to access numerous DeFi opportunities.

Liquid staking tokens can be used to provide liquidity on blockchains, and to earn passive income from the trading fees. You can also use them to earn farming rewards, as collateral when borrowing, or store them in a vault for compounded yields.

Since Ankr's liquid staking passes the burden of staking to validators on the supported blockchain, it gives you opportunities to do delegated staking on blockchains that don't run on liquid proof of stake (LPoS) mechanism. For example, Ethereum 2.0, while based on PoS validation, has no native support for delegated staking. With Ankr, you can delegate your funds to a full Ankr node on Ethereum 2.0 to earn rewards.

What Is ANKR Crypto Coin?

ANKR, the native token for the upgraded Ankr platform is an ERC-20 and BEP-20 token that works on both Ethereum and BNB Chain. The utility of the token revolves around the creation of a decentralized marketplace to power web3 development. The upgrading of the Ankr network to Version 2.0 has expanded the utility of ANKR tokens.

One of the major uses of ANKR coins is to pay network usage fees. Ankr has a premium plan package for developers that uses a pay-as-you-go model. Users can pay for the plan using "credits" or using ANKR tokens. Those that pay using ANKR tokens receive a discounted rate.

Another use case for ANKR is to provide collateral deposits to become an independent node provider on the network. To be eligible, you need to self-stake 100,000 ANKR tokens per node. Self-staking acts as an insurance policy so that node providers uphold the high uptime requirements of the protocol.

Additionally, ANKR token holders can delegate some of their tokens to node providers and share in the rewards earned.

ANKR tokens can also be used to reward Ankr’s independent node operators around the world. The rewards given are pegged to the amount of traffic that the operator serves. Hence, the best-performing node operator receives the most ANKR tokens.

To ensure that high standards are maintained by independent node providers, regular audits need to be undertaken. Ankr will work to carry out the audits with partners, who will receive ANKR tokens as payment.

Lastly, holding ANKR tokens will give you voting rights on Ankr DAO. By contributing ANKR tokens to a voting contract, token holders will influence the governance of the network.

The token’s use case is summarized below: 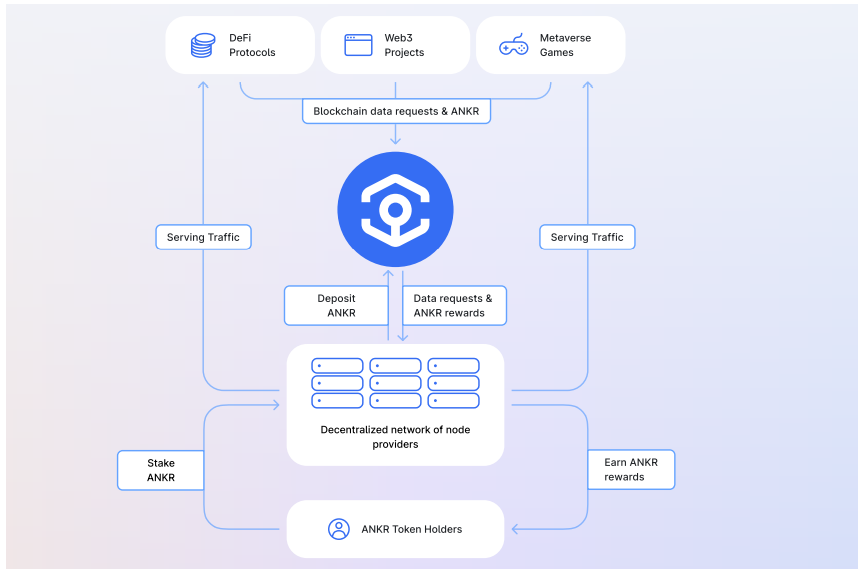 Ankr’s transition into the provision of a web3 infrastructure is a strategic move for the network. There’s an ever-increasing demand for web3 applications as more people and enterprises embrace the third-generation web movement.

Ankr’s suite of products, including its RPC services and advanced developer APIs, is critical for web3 growth. According to Ankr’s white paper, the network’s public RPCs are catering to over 7.2 billion daily requests to blockchains, with the number expected to grow over time.

ANKR coin hit its all-time high price of $0.2252 in March 2021. However, its current price of $0.047 (as of August 18, 2022) shows that the coin is holding on strong despite the prevailing bear market conditions. As the crypto market has shown signs of gradual recovery over the past month, within just two days ANKR’s price saw a small spike from $0.03 to $0.05 on August 12, 2022, underlining investors’ confidence in the project. 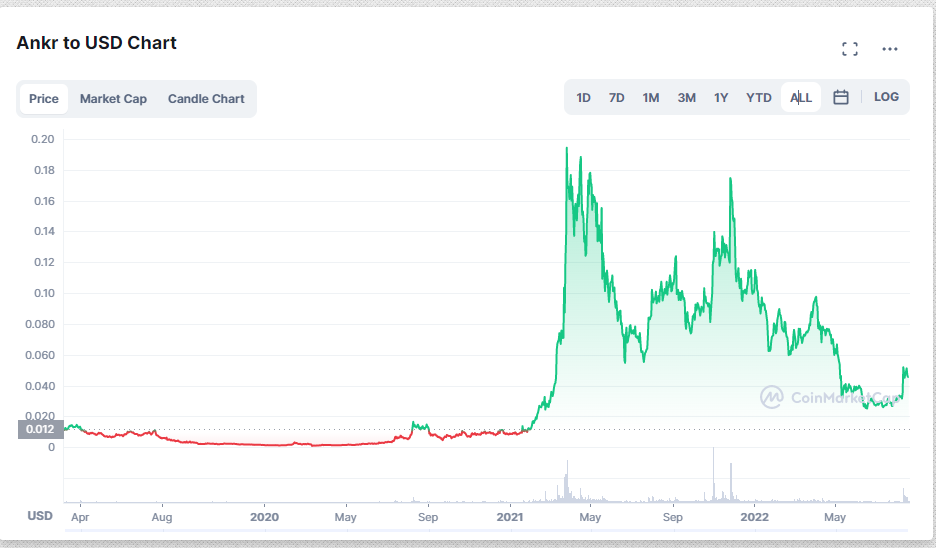 Considering the bullish sentiments toward web3-related projects, experts hold an optimistic price prediction for the ANKR token. Price Prediction forecasts the price of ANKR to cross the 1-cent mark by 2025 and reach a maximum of $0.32 by 2027. In comparison, technical analysis on Cryptonewz predicts ANKR’s price will reach $0.05 in 2023 and $0.09 in 2025.

Please note that this isn’t financial advice. Always do your own research before you invest in any cryptocurrency.

Where to Buy ANKR

You can buy or sell ANKR on major cryptocurrency exchanges such as Bybit. As a customer-focused crypto trading platform, Bybit prioritizes security, privacy, user-friendliness and availability of various trading pairs.

ANKR is available as a derivative or spot trading ANKR/USDT trading pair. To buy ANKR on Bybit’s spot market, follow the simple steps below:

Step 1: Create an account on Bybit and complete the registration process.

Step 3: Once you’ve purchased your USDT, navigate to the Trade tab, and choose Spot Trading from the drop-down menu.

Step 4: You’ll be directed to the trading terminal where you’ll need to enter ANKR/USDT on the left side of the platform. It usually displays BTC/USDT by default.

Step 5: Initiate a trade on the right side of the terminal by entering the amount of ANKR tokens you wish to purchase. 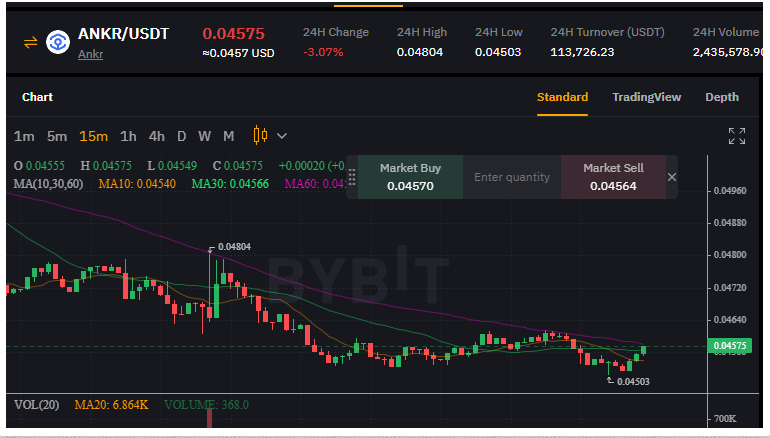 The web3 movement is growing by the day, and Ankr has put a solid infrastructure in place to support blockchains that wish to transition into the third-generation web. As one of the key players in the web3 node service niche, Ankr is experiencing rapid growth. As blockchains and web3 infrastructure expand, and grow increasingly sophisticated, we can expect that more and more blockchains will rely on Ankr to provide efficient, affordable and decentralized node services.