You don’t have to be a millennial to have heard of the games Fortnite or League of Legends. Indeed, electronic sports (esports) have taken over the globe. According to Insider Intelligence, the projected number of monthly esports viewers in the U.S. in 2022 stands at 29.6 million. From interactive GameFi projects to fancy merchandise on esports platforms, the gaming industry is rife with opportunities.

However, despite the multibillion-dollar revenue streams available in the esports industry, a huge chunk is getting lost through advertising fraud. According to VeraViews, advertisers could lose up to $100 billion in ad revenue by 2023.

Verasity was created because of this very challenge. Complete with an innovative esports platform and advanced adtech structure, Verasity is on a mission to disrupt fraud in the gaming and video content industry by leveraging blockchain technology.

Let’s dig deeper into the ambitious Verasity network and examine how it’s strategically positioned to cause a seismic shift in the world of esports one token at a time.

What Is Verasity (VRA)?

Laser-focused on esports, Verasity is an attention-based video and gaming platform built on the Ethereum blockchain that aims to solve the current advertising model. Founded in 2018 by RJ Mark, a seasoned tech hardware and software developer for over 25 years, Verasity aims to integrate with video platforms such as YouTube and Vimeo to provide crypto rewards to viewers and create a fair system for platforms to earn more revenue.

Their core focus lies in preventing ad fraud. Using the patented Proof of View (PoV) technology, Verasity seeks to eliminate the systematic scams plaguing digital advertising on esports networks. Brands are losing billions to malicious players who use bots and other avenues to manipulate views. Unlike trading bots that can safely execute a user’s game plan, ad bots are abusive and destructive to a platform.

Additionally, Verasity has developed a robust NFT(non-fungible token) authentication chain to curb fraud by creating blockchain-based ownership of esports assets. Verasity aims to take advantage of the NFT boom in the crypto space to give value to esports lovers around the globe.

VRA is Verasity’s native token. It’s convenient to use for staking, earning and spending on the Verasity ecosystem. VRA can be easily earned by watching video content and ads, which helps raise engagement and, in turn, revenue for video platforms. Available for trade in multiple cryptocurrency exchanges, VRA started as an ERC-20 token but has evolved into an ERC-777 token, complete with upgraded smart contract compatibility.

Verasity presents a unique approach to anti-fraud prevention in the adtech sector through a strategic interplay of VeraViews and Proof of View (PoV) technology. The duo work hand-in-hand to provide benefits for all three parties involved in the video streaming platform — advertisers, creators and viewers. 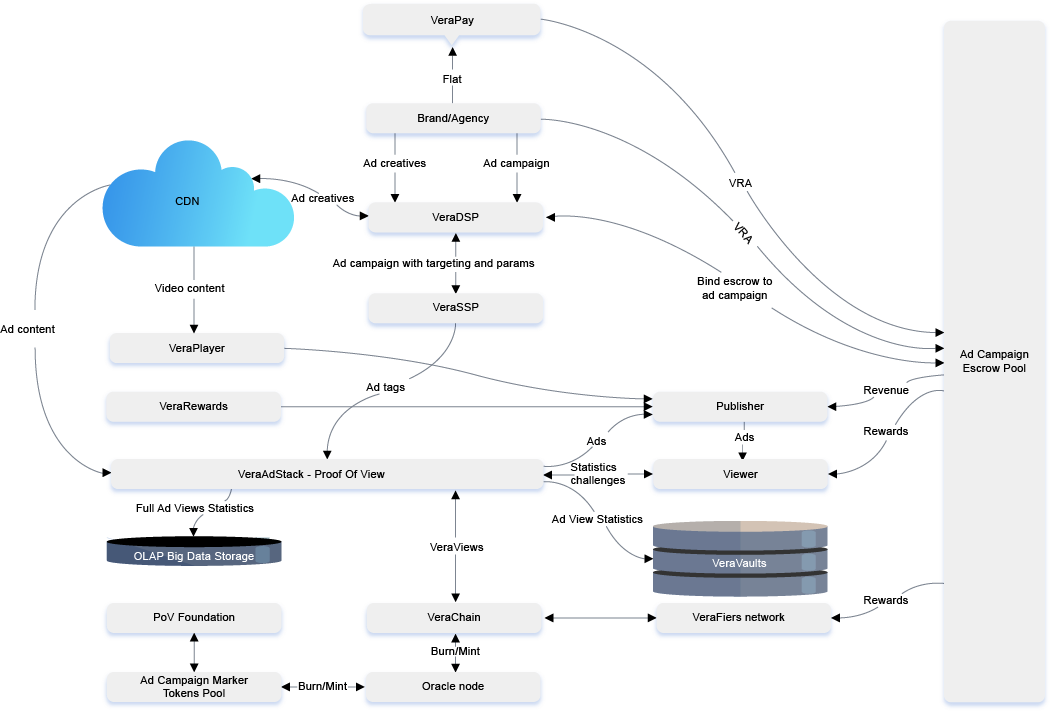 VeraViews is a blockchain-based adtech stack that uses off-chain and on-chain elements to ensure video ads reach real users. Proof of View (PoV) is a patented system that securely verifies audience views, recording the metrics on an immutable public blockchain.

Using PoV tech, VeraViews can confidently detect whether a bot or human is viewing an ad based on real-time viewer behavior. Traditionally, any questionable views needed a detailed fraud analysis that could take months, causing delayed payments to advertisers.

First, brands or agencies initiate a VeraViews ad campaign by depositing VRA tokens to the VeraWallet. This action creates an escrow pool that pays publishers and rewards participating viewers.

Viewers watch the ads, and PoV retrieves the statistics to analyze in real time. Each valid ad view logged in the blockchain unlocks the escrow pool and distributes the VRA tokens to the publishers and viewers.

In this way, VeraViews ensures that brands and sponsors pay for only valid and verifiable ad engagement; creators and publishers get paid within a few days; and viewers are rewarded for watching ads.

Apart from VeraViews adtech stack, there are several other verticals that constitute the Verasity ecosystem. They are:

VeraWallet is the vault of Verasity’s ecosystem. As the official wallet for VRA, users can store, earn and stake tokens on it. As mentioned earlier, the wallet has an escrow feature that lets video publishers and advertisers fund their ad campaigns. Their pooled VRA tokens are rewarded to viewers for watching the ads.

VRA token holders can also stake their assets and receive an 18.25 percent annual yield in VRA rewards. As VRA is an ERC-777 token compatible with any Ethereum-based wallet, users can seamlessly transfer their VRA tokens from their VeraWallet to an Ethereum-compatible wallet.

VeraEsports is a platform that integrates esports with digital currencies to transform the way people play and watch esports. Its incentivized model creates endless opportunities for gaming enthusiasts to get rewarded with VRA tokens for watching and competing in game tournaments. The earnings made in VRA tokens can then be used to redeem in-game currencies and items. VeraEsports has partnered with some of the biggest names in the gaming industry, such as Axie Infinity and VALORANT, to bring gamers world-class tournaments.

Through its robust website, players can join both public and private tournaments and even create tournaments complete with a prize pool and rules. Its intuitive API also lets users connect third-party tournaments to the platform. 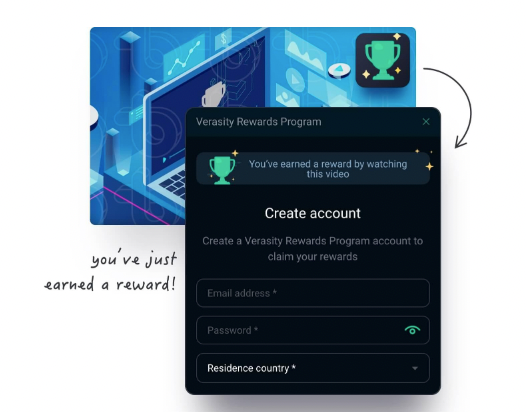 Through the Verasity Watch & Earn program, viewers get rewarded with VRA tokens for actions on the publisher site. A custom-built SDK allows integration with some of the world’s most popular publisher sites such as YouTube, Twitch, JW Player and Brightcove, among others.

A video player that supports the program can be identified through a trophy icon on the top right of the platform’s interface. When the trophy turns green and you click on it, you’ll be directed to VeraWallet, where you’ll receive VRA tokens for watching content on these video players. Viewers can also consume plenty of rich content directly on Verasity.tv and get rewarded for it.

These strategic integrations on Verasity imply that its network is ready to connect with millions of publishers and users who already support online video players. The Watch & Earn program provides a real-world use case for VRA through the reward model.

Verasity has also developed its own online video player, VeraPlayer, which utilizes sophisticated technology to create a user-friendly cost-effective platform.

Broadcasters can connect to the cloud directly using a laptop as opposed to relying on a server farm to broadcast. This innovative feature cuts down costs for broadcasters drastically since it eliminates the need to invest in expensive server equipment. Meanwhile, viewers can easily watch content from any browser without having to install extra software or plug-ins.

VeraWallet is also built into the VeraPlayer, which allows viewers to track their rewards from watching content from Verasity.tv or brand campaign ads.

VeraVerse is an advanced NFT ecosystem on Verasity. With an expected completion date of Q3 2022, VeraVerse will escort Verasity into the lucrative world of NFTs. Through its gaming partners, Verasity will collect and create in-game items and content. These authentic digital items will be available on the platform’s NFT marketplace.

Since it can already track viewership through the VeraEsports platform, Verasity aims to create value for NFTs through VeraVerse. Additionally, VeraVerse will leverage PoV technology on VeraViews to store data related to trading NFTs. The information will help identify the origin of the art and authenticate the seller, which will help reduce NFT fraud drastically.

In the second quarter of 2022, Verasity updated its white paper to expand its tokenomics, which would enhance its enterprise adoption and improve its past performance.

Verasity (token ticker: VRA) has a maximum and total supply of 110.36 billion VRA tokens. The total supply of VRA tokens does not include the tokens that have been burned so far, which add up to around 2.1 billion. Verasity conducts random token burns to increase the value of the VTA coin.

VRA’s circulating supply of 10.36 billion tokens is about 10 percent of its total supply. A huge chunk of VRA tokens, 100 billion to be exact, have been reserved to power Verasity’s ad stack technology. That said, these tokens will not affect the circulating supply, and are only meant to serve as marker tokens to assist with data circulation price in the network.

Verasity aims to provide anti-fraud solutions for NFTs and in the advertising space. By creating products such as VeraViews and Proof of View, it’s headed in the right direction when it comes to authenticating digital items and eliminating abusive players in adtech.

Similar to most coins in the crypto market, VRA’s price isn’t immune to volatility, and has witnessed various price swings over the years. In April 2021, Verasity price hit its first all-time high of $0.05, then came tumbling down to $0.01 in May. However, in the following months, it started an upward journey that culminated in a new all-time high of $0.0863 on October 31, 2021, as shown below:

As of today (August 3, 2022), the current price of Verasity is $0.006 with a market cap of $62.55 million. The VRA dropped from its highest price, which is understandable since the crypto market is currently going through a bearish phase.

That said, Price Prediction is bullish on the future outlook of Verasity, giving it a target price of $0.014 in 2023. Its analysts believe that VRA price could rise to $0.03 between 2024 and 2025, when the bull market cycle is expected to return. Coin Codex also expects its price to rise and possibly even hit $0.06 by 2025.

Keep in mind that these calculations aren’t meant as investment advice. Since the market is highly volatile and largely unpredictable, it’s paramount to do your own research and follow the latest crypto news before investing in any crypto asset.

In the few years that Verasity has been in the crypto space, its accomplishments have been formidable as compared to those of similar technologies, especially in the Video on Demand market. The platform’s VeraEsports tournaments have also been a force to reckon with in the esports industry.

Backed by a solid leadership and development team, Verasity is on track with its revamped road map to deliver game-changing products to the esports and adtech industry.