Unifi Protocol: The Blockchain With No Native Currency

Often, when you mention blockchain technology, it’s taken as a synonym for “cryptocurrency.” Indeed, most digital assets need a blockchain to operate.

But is it possible for a blockchain to exist without a native cryptocurrency?

Yes. And the team at Unifi Protocol is out to prove the benefits of a mindset shift toward blockchain adoption, rather than crypto adoption.

Read on to learn more about this ambitious and unique project.

What Is Unifi Protocol?

Unifi Protocol is a community-founded web3 organization on a mission to disrupt the current structure of blockchain technology as we know it.

Unifi is building a Stablechain — in short, a sustainable blockchain economy governed by a stablecoin rather than a native cryptocurrency.

At the moment, to use a blockchain, you need to transact in its native token (referred to as a “coin”), which is prone to inflationary tokenomics and unpredictable transaction costs. Unifi believes that an emphasis on network utilization rather than crypto tokenomics is the key to blockchain adoption.

To this end, Unifi Protocol utilizes the concepts of decentralized finance (DeFi) and cross-chain functionality to create a sustainable, utility-based blockchain model. Unifi incentivizes people to leverage DeFi products across multiple blockchains. It’s currently operating on 11 blockchains, and is continuously striving to add more to its network.

In its efforts to revolutionize blockchain technology, Unifi has developed some unique products:

uTradeV2 is an innovative, feature-rich automated market maker (AMM) built by Unifi Protocol on the Ontology blockchain. The second version of uTrade, launched following the upgrade of Ontology in February 2022, is designed to make Unifi EVM-compatible.

uTradeV2 allows smart contract integration, which has opened up the protocol for developers to launch their DeFi products across various blockchains. Developers can also customize a fee structure for each project, a unique feature of the platform.

In recognition of liquidity providers’ efforts, 85% of all trading fees are awarded to them in UP tokens, a unique token which increases in value every time it’s minted.

uBridge is a multi-chain bridging solution on Unifi that lets you easily bridge to supported blockchains.

The unique thing about uBridge is that it doesn’t use wrapped tokens. Usually, to bridge between Bitcoin and Ethereum blockchains, you need wrapped Bitcoin (WBTC), which you will then have to unwrap, costing you time and money.

If you’re using Unifi’s uBridge, you only need UNFI tokens to connect to an address on any compatible blockchain. Better yet, you won’t incur any fees if you’re using uBridge to bridge from Ethereum to any other supported blockchain — because the gas fees are covered by Unifi!

However, note that other cryptocurrencies are not supported by uBridge, i.e., it is a single-coin bridging solution specifically designed for the UNFI token.

You may stake UNFI on the Unifi protocol itself. Additionally, you may stake the TRX crypto on the Tron blockchain, ICX on ICON, ONE on Harmony, ONG on Ontology, and IOTX on IoTeX.

When you stake your tokens with uStake, you earn rewards from supported blockchain nodes in the form of UP, Unifi’s utility token.

DARBi is another of Unifi’s unique products, designed to bring modern technology to private institutions whose users participate in DeFi through decentralized arbitrage. 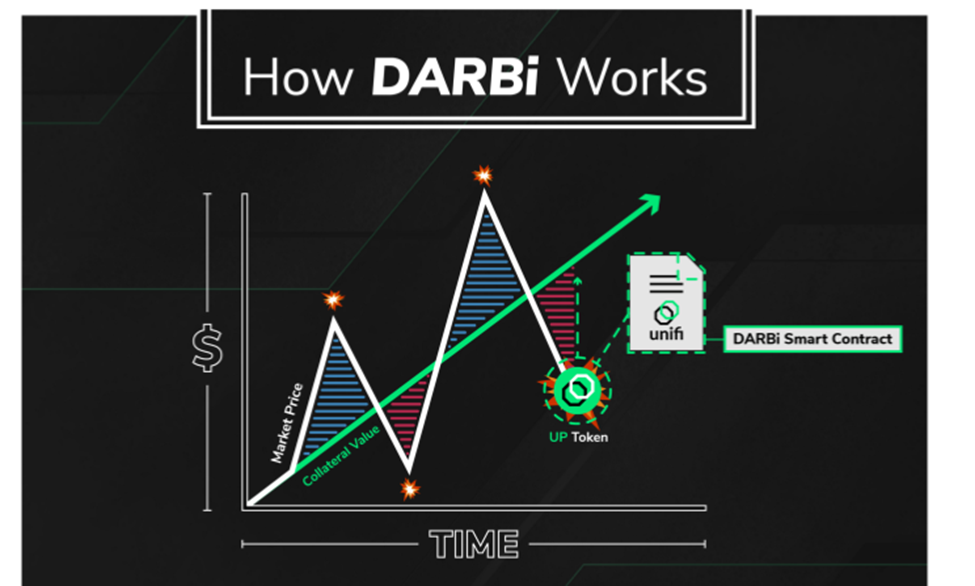 While Unifi Protocol doesn’t have a native cryptocurrency, the two tokens associated with the project are UNFI and UP.

What Is UNFI Crypto Token?

Unifi Protocol DAO (UNFI) is the Unifi ecosystem’s multi-chain governance token. UNFI plays a crucial role in Unifi’s token economy, and is listed on major cryptocurrency exchanges as a gateway to the protocol.

UNFI tokens can also be staked to earn rewards with a high annual yield. Currently, UNFI staking is only available on Ethereum, though the protocol hopes to add more blockchains in the future.

With the launch of uTrade V2, UNFI holders will gain access to UNFI Super Pairs, which can be used to farm liquidity provider rewards, as well as a bonus from fees generated by UP minting.

What Is the UP Token?

UP is Unifi Protocol’s utility token. It’s minted and backed by a base token (the native token of the supported blockchain) so that it may have a redeem or backed value. UP is managed by a smart contract, which uses 5% of the trading fees earned from supported blockchains to mint it. As more and more trading fees are collected, the redeem value will increase, which means when you convert it back to the base token, the token value rises — hence the name “UP.”

The redeem value, however, differs across blockchains, and is named accordingly. For instance, the UP redeem value on Ethereum blockchain is labeled as “UPeth.”

UP tokens can be redeemed into their base tokens at any time, but the longer you hold UP, the more native tokens will back it.

Previously, the 5% trading fee was the only way to increase UP’s redeem value. However, following a referendum on Unifi DAO to upgrade to UP v2, five new ways were added to increase the token’s redeem value: Direct public minting, staking rewards, liquidity pool rewards, arbitrage profits and the bonding UP process.

Unifi Protocol’s unique vision is to drive blockchain adoption by creating a utility-rich network, rather than building a cryptocurrency.

UNFI launched at a mere $3.98 in November 2020, but climbed rapidly in a few months to reach its highest price of $43.62 on the first day of March 2021. In the following months, the price corrected and has been declining gradually, hitting its lowest price of $1.36 in May 2022. 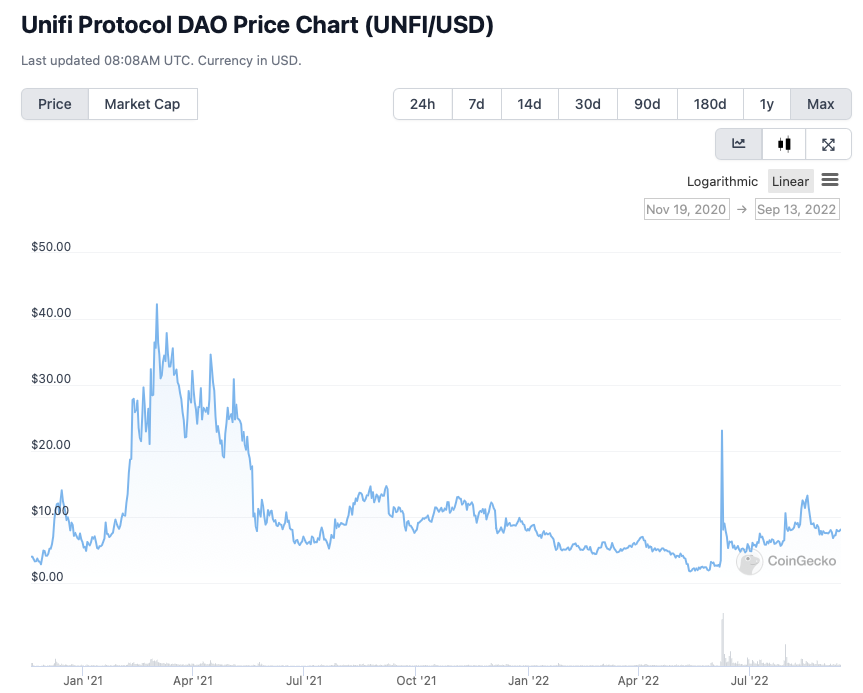 The Unifi Protocol DAO price experienced a brief spike to a high of $23.08 on June 8, 2022, before dropping quickly to below $10 the very next day. The price has been in the $7–$13 range as the market stagnates, which suggests that UNFI will continue to trade sideways for the rest of 2022. Experts such as WalletInvestor predict that UNFI is not a good investment over the next year.

While Unifi seems like a promising project, the volatility of the UNFI crypto price shows that it is still at a nascent stage, especially since many still equate a blockchain to a native cryptocurrency. Hence it is vital to always do your own research before investing in this blockchain.

How to Buy UNFI

You can buy or sell Unifi Protocol DAO on leading crypto trading platforms such as Bybit. UNFI is available for perpetual trading on Bybit. Following are the simple steps for buying UNFI on Bybit’s derivative market:

Step 2: Fund the account by purchasing USDT on the website’s Buy Crypto page.

Step 3: Navigate to the Derivatives tab and select USDT Perpetual from the drop-down menu.

Step 4: You’ll be directed to the trading terminal, where you’ll need to enter UNFIUSDT on the left side of the platform. It usually displays BTCUSDT by default.

Step 5: To trade the UNFIUSDT pair, you can use a Limit, Market or Conditional order. Enter the price at which you wish to buy the HNT token, as well as the number of HNT tokens you’d like to buy.

Step 6: You can open long or short trades with a single click. Select Long if you believe that the price will go upside, and Short if you think the price will move downside. To manage your risk, make sure to include both take-profit and stop-loss orders in your trades.

Unifi Protocol’s conception of creating a stablechain provides a disruptive way to scale blockchain by providing a solution to the perennial problems of inflationary tokenomics and transaction volatility.

Unifi’s unique products — such as uStake, uBridge and DARBi — have proven the project’s value to the ever-changing crypto community. Only time will tell whether Unifi will indeed change people’s mindset about embracing blockchain as a network, rather than a cryptocurrency.