Cosmos SDK is one of the world’s leading blockchain development frameworks. It hosts over 20 interoperable blockchain platforms. The diversity and the interconnected nature of these platforms let Cosmos proudly carry the name, “The Internet of Blockchains.” However, until recently, Cosmos had no chain with direct connectivity to Ethereum, the blockchain with the largest ecosystem of decentralized apps (DApps).

Evmos (EVMOS) is a scalable application-agnostic blockchain network which uses the Cosmos SDK framework to implement the Ethereum virtual machine (EVM), achieving full compatibility with Ethereum. Within the Cosmos ecosystem, Evmos is the first EVM-compatible chain.

The top five cryptocurrencies within the Cosmos ecosystem as of September 8, 2022

Thanks to this compatibility, Evmos-based applications can access the rich ecosystem of Ethereum DApps. There are other benefits to this EVM-compatibility. For instance, blockchain DApp developers may use Ethereum’s default programming language, Solidity, to build Evmos DApps.

How Does Evmos Work?

Evmos uses the proof of stake (PoS) block validation method based on the Tendermint protocol engine. Tendermint is a computational environment that provides the core security and validation features for Cosmos-based blockchains.

Any full node on the Evmos blockchain may apply to become a validator. The top 150 validators with the most EVMOS tokens staked on them are elected to process transaction blocks.

Evmos uses delegated staking, whereby any EVMOS token holder may back a validator of their choice with their tokens and earn a share of the staking rewards generated by that validator.

With block validation taken care of by the 150 active validators, DApp developers can concentrate on developing Ethereum-compatible applications on Evmos. Built on Cosmos SDK, the blockchain encourages flexible forking of new versions based on the core Evmos chain. This is in stark contrast to Ethereum, where forking is usually not encouraged, and is reserved for extreme cases.

This fork-friendly flexibility gives DApp developers more options to customize their DApps. If a developer decides that modifications to the core Evmos chain are required for their application, they can easily fork out a new Evmos-based chain customized to their individual needs. The new fork will still be within the Cosmos ecosystem. It will also enjoy the benefits of Tendermint-based block validation and EVM-compatibility.

The inter-blockchain communication protocol (IBC) from Cosmos also allows for a built-in interoperable feature within Evmos, connecting Evmos to other Cosmos chains. A bridge network, the ERC20 module, also enables interoperability between Ethereum and Evmos. This bridge enables transfer of crypto assets between the two chains, serving as a bridge between Evmos and Ethereum’s numerous popular DApps.

What Is the EVMOS Token?

EVMOS is the native token used by the Evmos blockchain. It has a maximum (and total) supply of 1 billion. As of the time of this writing (Sept. 8, 2022), the token’s circulating supply is 290 million EVMOS. There are three primary uses for the token — transaction fee payments, staking and governance.

EVMOS is used on the platform for the payment of all transaction fees. This function of EVMOS is similar to the way Ether is used on the Ethereum blockchain for gas fees.

EVMOS is used by full validator nodes for staking to validate transaction blocks. At the moment, around 40% of all EVMOS released on a daily basis goes to staking rewards.

Ordinary users/nodes may also delegate their EVMOS to a validator node to earn rewards from staking. These nodes will earn rewards proportional to the share of the total amount staked on their preferred validator. Validators charge a commission fee for accepting staking funds from other users. Each validator is free to determine their own commission rate, but the blockchain’s rules currently mandate that the rate be no lower than 5%.

EVMOS is also a governance token. Validators backed by EVMOS funds from other network users have the responsibility of participating in the platform’s ongoing governance.

In March 2022 EVMOS token’s genesis airdrop, known as the Evmos Rektdrop, first went live, along with the launch of the Evmos Chain. The airdrop is designed to reward early users who participate in staking, governance or conducting cross-chain transactions between Evmos and Ethereum. However, technical issues caused many to miss the airdrop, and the Evmos Chain to pause its launch. Evmos then relaunched in April 2022 with a simplified process.

The EVMOS token was launched in April 2022. In the first two weeks on the market it experienced a slump, from over $6 in late April to about $1.30 by mid-May. Such turbulence is not unusual for altcoins during their toddler days on the market.

Since mid-May, EVMOS has largely been stable, with much smoother fluctuations than most other cryptos. The token's current price is $2.44. As of the time of this writing, its market cap and fully diluted market cap are $745 million and $2.56 billion, respectively.

Experts are largely positive about Evmos’ growth, with Price Prediction anticipating it to rise to around $6.74 by 2025, and DigitalCoinPrice forecasting an even higher increase to $10.68 by 2025. 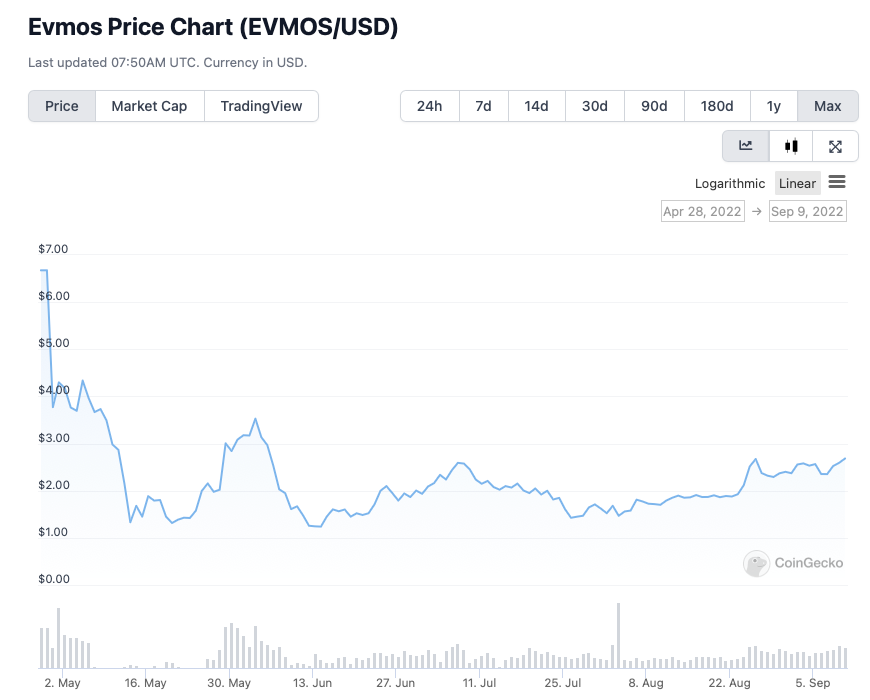 EVMOS is still in its early months on the market, so more data is needed to make firm estimates about the token’s longer-term prospects. However, given the novel and important service that Evmos offers — connectivity between Ethereum and the Cosmos ecosystem — we are cautiously optimistic about the token’s future.

In the foreseeable future, EVMOS might not be among the biggest market movers and shakers, but the token is very likely to maintain its rate stability, or even achieve some modest positive growth.

Evmos is the first blockchain platform that creates true interoperability between Ethereum and the Cosmos environment. This is likely to help the project in the future, as it will — at least for some time to come — enjoy the “first mover advantage.” The question now is not whether Evmos will succeed — we strongly believe that it’s on track to do so — but rather to what extent the platform’s unique service will help its market performance.